So Looney Tunes decided to get an over haul and a new series for a new generation.  All the classic characters are back, but with different voices, different animation, and a different feel.  It’s not all bad though.  There are plenty of laugh out loud moments and even some adult humor and some nods from the classic days riddled through the 30 minute episodes.  While this might not be for everyone, I definitely enjoyed this series.

So instead of the short 3-5 minute cartoons that we all remember growing up with, we are treated to 30 minute episodes of the Looney Tunes.  And instead of random slap sticky situations, we have more of a continuity based series minus most of the slap-stick.  In the Looney Tunes world, Bugs and Daffy are roommates with Yosemite Sam living next door.  It all plays out like a funny sitcom more than the usual cartoon shorts.  The animation is really cleaned up and we don’t get that old filmic look which I kind of miss, but everything looks sharp and spot on.  In the middle of some of the episodes, there is usually a music video of sorts with one of the Looney Toons characters singing or rapping.  It’s hit or miss really.  And there is always a Road-Runner/ Wild E. Coyote short after each episode.  And these are done in full on CGI.  It took some getting used to, but it’s definitely worth a look.  Episodes include: Monster Talent, Reunion, Casa De Calma, and Devil Dog.  All these episodes have the Road-Runner/ Wild E. Coyote episodes with them.   I wish Warner would have just released this all at once, instead of in volumes, but I digress. 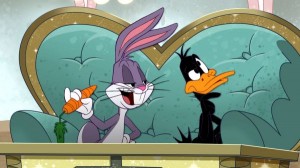 The series is not in HD, meaning it does NOT have that glorious 1080p transfer.  It is presented in its original full frame 1.33:1 aspect ratio.  For not being in HD, it surprisingly looks pretty darn good.  This new animation looks clean, clear, and polished, bringing it a better video transfer.  The audio has a stereo Dolby digital mix  and sounds pretty good.   Most of the sound is on the front speakers, but I got a bit of ambient nose from the rears.  I thought the audio was superior to the video. 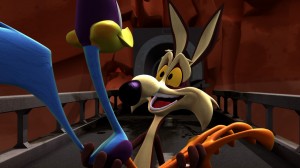 I actually enjoyed watching these new versions of Looney Tunes.  I do believe they need to be in HD, for them to be at their best video quality.  If you are a fan of Looney Tunes, then I highly recommend picking up these volumes despite them not having any extras or being in HD, because they are really great cartoons.  The cast and crew really did a great job making these entertaining.   If under $10, I’d pick it up.  You can pick it up for under $10 straight from the WB Shop HERE.  Or you can get it for just over $10 at Amazon.  But I would suggest not getting these if over $10.