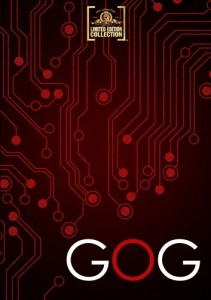 I love old 50’s sci-fi movies.  I always have and I always will.  There’s just something that brings me back to the 80’s growing up watching old sci-fi movies with my dad that makes everything in life seem better.  ‘Gog’, a 1954 sci-fi film was recently released by MGM on DVD and it was a blast.  I really enjoyed the film for what it was and it brought back a bit of that nostalgic feeling from my younger days.

One of the reasons I might like this film is its little similarity to Kubrick’s ‘2001 A Space Odyssey’.  The film tells the tale  of a top secret underground lab in the New Mexico desert where top scientists are building a fully functional space station to launch into orbit around Earth.  Suddenly, several agents turn up dead and agents from Washington are called in to investigate these mysterious deaths.  Upon doing some investigating work, the investigation team rules that the NOVAC (the central computer to the underground lab) is being deliberately disrupted by an outside source.  The central computer controls all other machines in the underground lab and they figure out that these machines and computers are responsible for the deaths of the scientists.  It becomes more difficult to figure out how the machines are being sabotaged and without haste, several more scientists bite the dust.  In time the investigation figures out that a secret transmitter was built into NOVAC and that an enemy has been flying high above signaling and sending transmissions to NOVAC instructing it to kill.  So where does “Gog” come in and what does it mean?  Gog is a small and mobile robot that wheels around doing various duties.  Gog has a sort of twin brother called Magog who does the same thing.  They both have arms and claws that can grip items in reach.  Magog gets a transmission to enter a nuclear reactor room in the underground lab and carry out a mission that will lead to the whole place exploding in a nuclear explosion.  From here, the detectives and Gog and Magog battle against each other.  Who comes out on top?  Does the nuclear bomb go off?  Only you can find out. 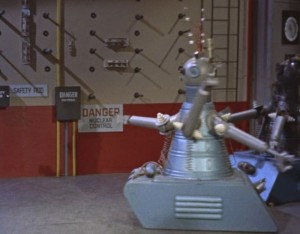 Originally, the film was shot in 3D, but there is no 3D here, and it was in black and white, but we get a colored version here.  The film is in standard definition and is in full frame.  Surprisingly, the picture looks quite good for what it is.  It looked really cleaned up with the colors glowing bright.  It was a fairly sharp video presentation with great detail.  More than I expected.  The audio is a mono mix and it is what it is.  The dialogue is clear, but just not a whole lot going on.  It keeps to the front speakers, however I did not notice any hissing or cracks.  For 50’s sci-films, it’s decent. 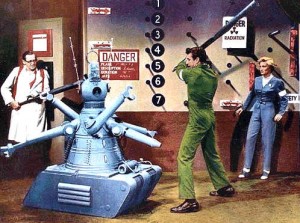 This is a made to order DVD on DV-R format.  And holy shit, for a $20.00 price tag, what is MGM thinking?  I get how you won’t find this film really anywhere, but for that kind of money, you better have put it on HD, and have a few extras.  I can’t really recommend this release for the price.  If it drops below $10.00 then yes, but I’d wait.  I really liked this movie a lot.  If you are a fan of those 50’s sci-fi films, then you will love this, but at the price, it’s not worth it.  MGM, if you’re listening, lower the prices on these DV-R’s or make up in HD and put some extras on them.