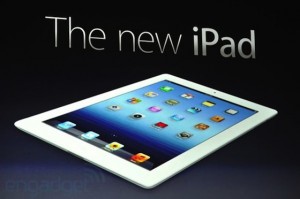 The much anticipated Apple conference was today and Apple unveiled their new Apple TV unit and the iPad 3 which is actually called “The New iPad”.  I gotta say, just like the past few conferences Apple has had in regards to the iPhone and iPad, I am less than thrilled about their product.  Apple continues to claim they are pushing the envelope with new product, but in reality, they just upgrade minor details to their product.  Only once every few years does Apple really make a product worth buying.

Let’s start with the new Apple TV which by they way was the better item they talked about today.  The new Apple TV now supports true 1080p HD streaming and has a new user interface.  You will also be able to re-download movies you have previously purchased on any device in 1080p.  Also, iTunes in their iCloud network now supports films.  You will also be able to get your iTunes playlists from iCloud on the Apple TV as well.  There are quite a few third party apps which are available to now and are easy to get, one of them being Photo Stream.  Apple TV now will recommend movies for you based on what you have watched.  I bet they got that idea from Netflix.  You can start any movie or show at any point in time and play from there.  The price is still $99 and you can pre order today and will be available next week.  Decent upgrade in my opinion.  If you don’t own an Apple TV, and you are big into Itunes, then Apple TV is the way to go.  It has a very simple interface and has a huge catalogue of titles.  But if you are an Amazon Prime member, the Roku might be the way to go.

Now onto the iPad 3…ermm I mean the “New” iPad.  The new iPad now has a much higher resolution display than the previous iPad 2 did.  It’s a 2048×1536 display meaning  it’s 3.1 pixels.  That’s the most for any mobile device out now.  A standard 1080p display is usually 1920×1080, so you can see there is a slight upgrade here.  There is also a 44% better color saturation than the previous model making it easier, clearer, and crisper on the eyes.  One of the bigger and better upgrades to this iPad is the new processor.  It has an A5X processor meaning quad core graphics.  So you gamers out there should be happy about that.  Apple claims that this new processor is twice as fast and four times the performance of the Tegra 3 NVIDIA processors.  But who knows where they came up with that.  There is a new camera which is a 5 megapixel backside illuminated sensor with 5 element lens.  It has an IR filter, and ISP built in, and auto focus and and auto exposure.  If you have the iPhone 4S, then it is pretty much the same thing, just now on the “NEW” iPad.  Apple has also added 1080p HD recording for its video camera.  So if you must record in HD, you now can with the iPad.  There is also a software stabilization program that helps with shaky cam work.  Also on the iPad now, is Voice Dictation.  Which is a bit like Siri for the iPhone.  There is a microphone button now on your screen you can push it and start speaking.    We will see how well that works.  The “New” iPad will also come in 4G LTE.  The iPad 2 had 3.1Mbps on EV-DO and 7.2 on HSPA.  This new iPad has 21Mbps on HSPA, 42Mbps on  DC-HSDPA, and 73Mbps on LTE.  Huge improvement there.  Also the new iPad can now be a personal wifi hotspot if your carrier allows it.  The battery life is the same with 10 hours time and 9 hours being on 3G or 4G.  iT IS 9.44mm thick and weighs 1.4 pounds which is a little  than the last one.  Prices have not changed.  Hard Dive space has not changed either.  16 GB, 32 GB, and 64 GB are the only models available with the option for 4G.  Lowest price model goes for $499.  The highest price model goes for $829.  While the iPad 2 models will most likely drop by $100 or so dollars.  All the stock apps will be updated and optimized for the new display with  a few new games and apps you can download.  The “New” iPad will be available March 16th while you can pre order them today.

My advice to you, is WAIT.  Apple is coming out with another iPad later this year which will be cheaper.  Not enough has changed from the iPad 2 to this new iPad to warrant buying a new one.  4G is cool in theory if you live near a tower, but it has problems.  Your 3G is everywhere now, so stick with that.  The HD is cool, but with recording HD and saving HD related files, that can fill up your HD space fast and with a mere 64 GB of space, you will find yourself deleting tons of stuff.  Yes, you can put your files into the iCloud system, but that requires hoops to jump through and wifi access.  I’d rather have my digital download or physical copy.  The new processor and graphics card are great.  Hopefully it will get used to its fullest.  If you are a hardcore Apple enthusiast, I have no doubt you will be getting one of these, but trust me, there will be a new iPad coming out by October.  There is a reason why they are not calling it the Ipad 3.