Spartacus, returns from the burning arena with his recued men. He realizes the slaves plight and  urges his rebels to train for the defense of their new sanctuary. Lucretia and Ilithyia find comfort in each other’s arms as the deal with the wrongs that have been done to them;  Asher turns from Lucretia’s service and recruits some leathal allies to Glaber’s forces.

Spartacus triumphantly returns to the temple sanctuary with an injured Oenomaus, a battle worn Crixus  and guilt ridden Gannicus. Oenomaus is quickly ferried inside and healers set on him with a ferocity to save his life. Gannicus hovers close near his friend holding on to the hope that he will be able to have words and explain what happened the night Oenomaus’ wife died.

Later, Gannicus balks at the idea of joining Spartacus and the rebels against Rome, feeling that Spartacus is only leading the rebels to their deaths. Spartacus is unable to convince him otherwise even after seeking advice from Crixus, who had known Gannicus in the ludus.

The happy reunion was short lived as Naevia’s ordeal in the mines continues to haunt her, rending her incapable of being intimate with the man that she loves. When asked what she would have him do, she tells him that she would have him teach her to fight so that no man would lay another hand on her without her consent.

Crixus is torn between gratitude to Agron for being a part of his rescue, and hatred for Agron telling a lie that left Naevia in the mines one more day.

Lucius points out that the slaves need archers and sets out to train a few of the house slaves in the ways of archery.  Mira shows talent for the skill and continues to practice.

When Oenomaus awakens he finds Gannicus sitting with him. Gannicus attempts to explain that Melitta chose her husband and that the two were brothers. Oenomaus responds by saying, that while they may have been brothers once, the offence of Gannicus sleeping with Melitta was a slight not easily forgiven or forgotten and that anything Gannicus had done was for himself.

At the end of the episode the map and the last of the coin has gone missing. Spartacus accuses Gannicus, who is leaving after having words but finding no comfort or forgiveness with Oenomaus, of taking the map. The two begin to fight brutally. Using the fight as a distraction, Chadara attempts to make her escape. She was unsure of her place amongst the slaves and was setting out to create a life for herself. Mira draws her bow and fires an arrow which kills Chadara. They find the map in her possession. Gannicus takes his leave after being proven innocent of the theft.

We find Ilithyia and Glaber in a room with a man reading off the will of Albinius, Ilithyia’s father. Glaber has been named the executer until Albinius’ heir comes of age to take control of the family estate. After the man is dismissed, Glaber wonders what drives Ilithya’s tears more, the lost father, or the fact that her father would not be able to dissolve the marriage to him? Ilithyia insists that she had made a mistake and that the Gods were punishing her. Glaber then informs his grieving wife that the only reason she was alive was to protect and carry his unborn child to term.

Glaber, dismayed that so many of his men were returning to the villa asked his commanding officer as to the reasons for the dwindling numbers. To which he received the reply that the men believed that Spartacus unleashed the Gods wrath. Asher upon hearing this boasted that as he had advised once before, that one trained gladiator was worth three roman soldiers. Glaber insisted that Asher prove his bragging, and face three of his men. Asher made quick work dispatching the soldiers and stated he was but the lowest of the gladiators and that if Glaber wanted to defeat Spartacus and his men, Glaber would need similarly trained men on his pay roll.

Lucretia confronts Asher about how Glaber came to find the poison that would have aborted Ilithyia’s unborn child. She tries to bring Asher back under her heel but finds that the tables have turned. Asher’s new found status and pride have made him bold. He rapes Lucretia to show his dominance over her and sets to off to recruit men as deadly as he. He finds one man of note in a brothel and another whom we only know as “the Egyptian” in a hole in a prison.

Ilithyia and Lucretia have a chance meeting in the bath and find comfort in one another over their separate wrongs. The two scheming women begin to make plans for Ilithyia to win back Glaber’s affection. At which point they will make their move to be rid of him.

Glaber does his best to mend fences with young Seppius. He knows the young man’s soldiers would make a most welcome addition to his forces. Seppius informs Glaber that his decision will be given the following morning. Iliythia, acting on Lucretia’s advice, extends an invitation to Seppia, Seppius’ grieving sister, to come visit her so that they may comfort each other over the death of a loved one.

Seppia’s visit to the villa begins well enough. But the young girl sees through the deception and calls out the older womens’ alterior motive for inviting her to a visit. After some coaxing from Ilithyia, Lucretia, and Glaber, Seppia agrees to speak to her brother on their behalf about joining forces.

However, Glaber, wanting to see the newly recruited brutes in action, decend on Seppius’ home. The men slaughter every  living person in the villa as Glaber kills Seppius slowly while mocking him. 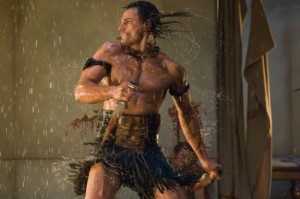 Spartacus: I did enjoy the fight between him and Gannicus. I am disappointed that it there was no clear victor. As terrible as this sounds, I think it is a good thing that Spartacus wasn’t able to use his words to win Gannicus over to the cause. If anything would have won him over, it would have been at the conclusion of a fight with Spartacus if Spartacus had won the battle.

Mira: She is becoming more her own woman every episode. For a while she was just the female that shared the bed of our hero. She is doing her best to break the mold prescribed for women and fight with the others for her freedom. She is not content to just sit around and wait to die.

Crixus: We got to see him in a helpless light. He is unable to take Naevia’s pain away from her and he is at a loss of how to help his beloved. It shows a depth to his character that he is not just a mindless bumbling warrior. But a deeply sensitive man who would burn down Heaven if it meant his love would be happy.

Naevia: At first she was pissing me off. I wanted her to grow a pair so to speak and fight. And well, that’s exactly what ended up happening. She is taking the pain and horror and channeliing it into something other than tears. She wants to reclaim herself and become a stronger woman for herself and to be truly reunited with Crixus.

Glaber: He was the down right ruthless this episode. I can’t say that I begrudge him his harsh words to Ilithyia. She was going to kill his child and run off with another man. She broke his heart. The work he did to Seppius and that house hold, well, kudos to him being the villain. He wears it well.

Lucretia and Ilithya: I put them together this week because they faced similar things emotionally and found comfort in each other. There seems to be a new found trust between the two that now seems genuine. Two of the shows best plotters and schemers have joined forces. What things will they come up with to try and manipulate Glaber into falling for his wife again?

This episode hade a lot of really good moments. I will say that I was happy to see Spartacus’ weekly “we must fight for freedom” speech interrupted by Crixus and Agron’s fight. I know Spartacus is the hero, but I’m sure at this point even his followers are tired of hearing it. For us at least it’s a weekly experience. For them it’s an almost daily ordeal. I guess you could say I am hard on Spartacus, but it’s only because I expect so much more from him. The fight with Gannicus while potentially epic, left me disappointed. I wanted more. The way they filmed it was also frustrating. Every large hit was turned into slow motion and then a sudden speed up for the follow through. It was the visual equivalent of being in the car with someone learning how to use the breaks.  As an episode, there were times I found myself bored. It didn’t hold my interest as a show of its caliber should have. There were good points but the main reason I am looking forward to the up coming episode is because this one left me hungry and not in a good way.