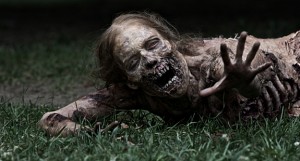 I’m so proud of ‘The Walking Dead’.  I was just discussing the other night with friends, that back in 2008, while we were deep into reading ‘Walking Dead’ comics, that we fantasized about a ‘Walking Dead’ series.  And back then we thought that it would never become a reality.  Why would it?  Do people unlike our geek and nerd selves love zombie stories? Are there people out there that have constructed a full on zombie survival handbook on their own?  Well, going by the record viewers for this mid season 2 opener, that answer would be YES.

AMC says Sunday’s return of ‘The Walking Dead’ had 8.1 million viewers at 9 p.m.  Which is their largest viewing yet.  And it made it the most watched one hour basic cable drama EVER.  The dead marches on.  Kudos to ‘Walking Dead’.  Just wish Darabont was still there.