The Complete ‘Indiana Jones’ Bluray Collection Has Been Announced!!! 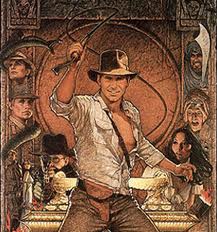 Finally, Indiana Jones is coming to bluray.  Looks like the Fall of 2012 will be the time area of the release and even Amazon has a pre-order link right now of $74.99.  I bet the price will go down even more by then.  Now technical details or extras have been announced yet, but hopefully we will get what was on the DVD version plus more.  And for FUCK’S sake, I hope Lucas doesn’t change anything with these.  Paramount released the following info today.

The man with the hat is back and looking better than ever! The world’s favorite globe-trotting archaeologist is, at long last, embarking on his greatest adventure – when ‘The Complete Indiana Jones Blu-ray Collection’ comes to Blu-ray Disc from Lucasfilm Ltd. and Paramount Home Media Distribution. ‘The Complete Indiana Jones Blu-ray Collection’ will be excavated in the fall of 2012 and will include all four of Indy’s thrilling adventures, using the highest possible high definition picture and audio presentation – along with a “best of” collection of documentaries, interviews, featurettes and a few new surprises.

So hopefully in the coming months we will know more of what to expect from this set.  “That’s no moon”.  Shit, wrong movie.