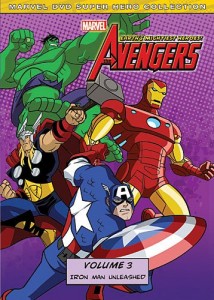 Having not seen Volumes 1 and 2, I considered that I might be a bit confused coming into the plot. However, a review like this can be done by a fangirl like me due to an extensive knowledge of comic book characters and situations. I marched right into Episode 14 of this series without breaking a sweat, and was mildly disappointed to learn that I am not special here – anyone could do it.

With the new movie coming up, anything related to The Avengers has some hype added on. This 2011 series is no exception, and it deserves the attention it gets. From the first kablooey to the ending bang, it delivers our soon-to-be-even-more-famous heroes to us as we’re used to seeing them.

It’s been a while since I watched a cartoon like this, so getting used to the line art was a little hard at first. Once I got into the swing of things, however, I found that I quite enjoyed the artwork. It sort of reminded me of the old Batman cartoon, but with a little anime hair thrown in for kicks. Clearly aimed at a younger crowd but detailed enough to catch the eye, Earth’s Mightiest Heroes is a good mix of simplistic design and lively expressions. For example, the look of “huh?” on The Hulk’s face whenever something confuses him never gets old. 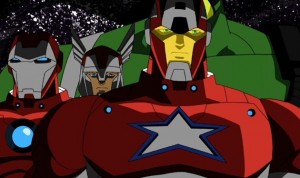 THE AUDIO AND VIDEO

The sound is presented in Dolby Digital 5.1 Surround Sound. As I’m playing it on my laptop, I don’t exactly think my room is exploding whenever there’s a “BOOM”, but the dialogue is crisp and clear and the sound effects are almost onomatopoetic – they sound like the word “KRAKATHOOOOM!”…or, you know, whatever they’re going for.

Video is widescreen 1.78:1. Again, very crisp, very clear. Nothing blurs or moves too fast to keep up with, which is always a little iffy on a project like this. The colors are bright and interesting – Hulk is very green, Iron Man is very red-and-yellow, etc. Everyone is easy to tell apart during a battle scene, since no one’s colors are too similar.

The backgrounds seem to be painted on, with the action moving around in the front. It lends that comic book feel that we all hope for in our superhero cartoons. 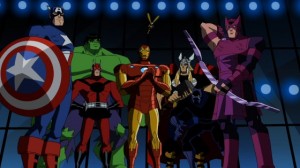 Avengers Unmasked: Masters of Evil: A visual commentary while Episode 14 is playing, this fun little extra gives us a look at the comics versus the series. Trivia, fun facts, that sort of thing.

Worth a watch, I do declare. Sit down with the kiddos, throw in some popcorn, and enjoy. While it’s made more for said kiddos, it’s fun for everyone. I’m in my twenties and had a ball.

The voice acting is nothing special, but again, it’s a kids’ show. As long as the dialogue is understandable, it doesn’t have to be fantastic. I am going to point out that while I love Robert Downey Jr.’s Iron Man, Eric Loomis gives him a pretty good run voice-wise. Wisecracks are always fun when delivered with such suavity. Hawkeye has his moments as well.

Also, I’m a sucker for a good opening. This one is practically a headbanger with some great visuals, Tony Stark’s appearance in the midst of Jarvis’ screens a standout. Ahhh, it’s been so long since opening credits have been good and decent length. Thank you, Marvel.

You don’t have to know anything about the Avengers to watch this. Just be able to have fun.