That’s right!  The company that brought you Final Fantasy has just announced a new game called ‘Sleeping Dogs’ which is part of the True Crime series, and is a hardcore cop drama that has the open world scenario.  Kinda like the Grand Theft Auto series does.  The game will be set in Hong Kong, and vows to have “intense shoot-outs, adrenaline-fuelled street races and intense, brutal martial arts combat”.  I don’t know, but this sounds like Square Enix’s answer to the Grand Theft Auto series.  And by the sounds of it, it promises to have a pretty good combat section.

It seems like Square Enix has been putting the pieces back together again on the game since Activision abandoned it last year.  And now things seem to be on the right track.  The game will follow Wai Shen, an undercover cop who will be solving crimes and investigating bizarre scenes and places in Hong Kong.  I’m excited to see full gameplay with this release.  It will street on the PS3, 360, and PC sometime after summer of this year.  See the full story over at IGN. 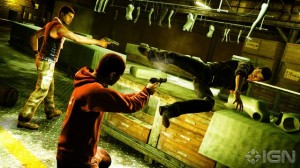 Check out the cool trailer below for the game and see some screen shots.