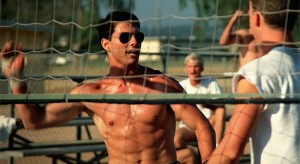 I really don’t understand why they would want to remake ‘Top Gun’.  In my opinion, ‘Top Gun’ is the most overrated film in cinema history.  It’s one of the most boring films I have seen and not to mention it hold’s the gold medal for most homo-erotic film ever made.  Well according to HWR, Peter Craig, who wrote ‘The Town’ has been hired to write the sequel for ‘Top Gun’ for Paramount.

Jerry Bruckheimer and his company will produce the film and Tom Cruise has said he really wants to make a sequel.  Will Tony Scott come back to direct the sequel?  Will Tom Cruise have a hand in the film?  Who knows, but It Shouldn’t happen.     I just love when pretending macho guys say that this is their favorite film.  First of all, if someone says that Top Gun is their favorite film, they are a complete cinematic idiot.  Other than the fact that Top Gun is completely riddled with some of the most blatant and over the top homoeroticism ever shown on film, this film is completely boring and not worth watching.

Let’s look at the facts shall we??  1) All the main characters are in the NAVY. 2) Maverick walks in the ladies room on purpose.  3) The aviator sunglasses and skin tight uniforms are endless.  Fucking everywhere.  4) The head commanding officer is constantly screaming “I want some butts!”  I shit you not.  5) Goose’s mustache is fucking glorious and homo-erotic. 6) There is a volleyball scene in this film that really might be the most homo-erotic scene in cinema history.  Tons of shirtless, oiled up guys high fiving, slapping each other’s asses, and playing volleyball to a song that has the lyric “playing with the boys”. 7) Maverick constantly talks about showering or he is showering.  He is never alone when he showers.  He is always with other guys.   8 – One hot blonde girl tries to fuck Maverick but he constantly denies her.  That is until she dresses up as a dude in uniform and then he fucks her.  But then, he runs off and cries and thinks of his male lover.  I can go on and on, but then I would be up all night.  Yes there is some violence here and there.  Maverick’s male lover dies and some Russians die, but back in the 80′s they really weren’t considered people.  Boring fucking movie.