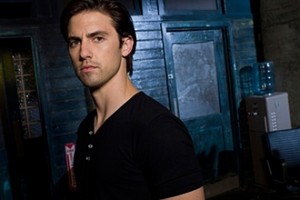 We’ve talked about Darabont’s upcoming project ‘L.A. Noir’ before.  Jon Benthal is set for the lead role of the series with Darabont writing/producing and directing the 1st episode.  Now, Milo Ventimglia of ‘Heroes’ and ‘Gilmore Girls’ is set to star apposite Bernthal.  I’m a fan of Milo’s and I hope the network will let Darabont  do his thing, unlike AMC for ‘Walking Dead’.

Ventimiglia will play Ned Stax, a former marine who served with Joe Teague (Bernthal) during WWII, now a budding lawyer groomed to be a master “fixer” for the mob.  The project is based on John Buntin’s book L.A. Noir: The Struggle For The Soul Of America’s Most Seductive City, which chronicles the epic battle between Los Angeles Police Chief William Parker and mobster Mickey Cohen.  ‘L.A. Noir’ is the true story of a decades-long conflict between the LAPD, under the determined leadership of Parker, and ruthless criminal elements led by Cohen, a one-time boxer who rose to the top of LA’s criminal world.

The series is a fast-paced crime drama set in Los Angeles during the 1940s and ’50s. It’s a world of glamorous movie stars, powerful studio heads, returning war heroes, a powerful and corrupt police force and an even more dangerous criminal network determined to make LA its West Coast base. “This project is a sweeping tale of the battle for the soul of the city that was waged between the forces of the LAPD and the West Coast mob,” said TNT’s head of programming Michael Wright. Added Darabont, “Noir is a passion of mine, so I feel blessed to delve into a project that speaks in the hard boiled vernacular. John Buntin’s superb book, though non-fiction, is our touchstone and inspiration for the stories we’ll be telling, weaving fiction throughout the facts and facts throughout the fiction. … The goal is to deliver on the tone that the title L.A. Noir promises: a smart, gritty, authentic, period noir drama.”