Machete To Return in ‘Machete Kills’!!! 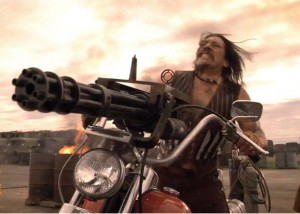 “This time, they fucked with the wrong Mexican again!”  Robert Rodriguez is teaming with producer Alexander Rodnyansky to chop up a sequel to ‘Machete’.  This will be the 2nd film out of a planned trilogy in the ‘machete’ universe.  The second film will be called ‘Machete Kills’ and Rodriguez and Rodnyansky are trying to get everyone in the first film to come back for the sequel.  Well at least all the people who made it to the end without being chopped up, sliced into ribbons, decapitated, or who had their intestines sprawled out and used as a rope to swing from floor to floor.

“The fan response to the Machete character has been fanatical since his first appearance,” Rodriguez said. “Machete is truly a super hero and Machete Kills will be bigger and more ambitious than the first time.”  Everyone is hoping for an April shoot to begin and that hopefully everyone will return.

The new film finds Machete recruited by the U.S. Government for a mission which would be impossible for any mortal man. Machete must battle his way through Mexico to take down a madman cartel leader and an eccentric billionaire arms dealer who has hatched a plan to spread war across the planet with a weapon in space. Machete takes on an army in an effort to dismantle a plan for global anarchy.

I am all in for a sequel.  I loved the first film, and no doubt will love the second film.  I only hope that Rodriguez casts somebody as great and hilarious as Steven Segal for the villain.  Because that was amazing.