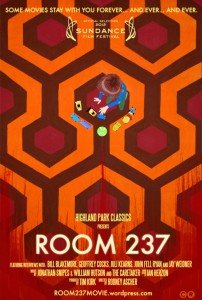 Now most of you know I am a HUGE fan of Kubrick’ work.  Anything related to the director, I want to read, watch, and cherish.  There was a documentary that premiered at Sundance recently entitled ‘Room 237’.  It is a documentary on the Kubrick’s ‘The Shining’ movie.  Not the one made by his daughter that is shown on the DVD, but rather a different type of documentary that explores the insane conspiracy theories and subtext of the “real meaning” of ‘The Shining’.

The documentary was made by Rodney Ascher and some of the crazy conspiracy theories I have even heard and read about myself over the years.  One of the big ones is that Kubrick actually filmed Apollo Moon landing on a sound stage which means we never really landed on the moon and that he was angry about it, so he told the world in a subtle message.  Another theory suggests the film was an anti-holocaust film.

The film will make the rounds at the festivals and IFC will put it in theatres and give it a VOD release later this year.  The sooner the better.  Can’t wait to see this.