Haley Joel Osment To Star In Sci-Fi Film, ‘I’ll Follow You Down’!!! 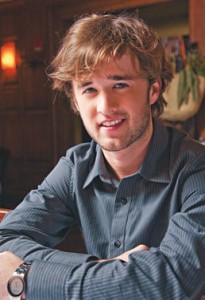 It’s been a long time since ‘A.I.’ and even longer since ‘The Sixth Sense’.  Haley Joel Osment will star in the upcoming sci fi film ‘I’ll Follow You Down’ directed by Richie Mehta.  The film follows the story of a scientist who mysteriously disappears after a business trip, only to have his son Erol, played by Osment, make an eerie discovery about his whereabouts, several years later.

‘I’ll Follow You Down’ is a follow up film to Mehta’s ‘Amal’ which has won tons of awards.  “Richie has penned a script that tells an emotionally charged, thrilling story while staying true to the sci-fi genre,” said producer Lee Kim. “Our main challenge was to find the right actor to play the lead role of Erol – one that requires the perfect balance of innocence, honesty and intelligence; Haley provides just that.”

I’m glad to see Osment back to work again.  Over the past few years, he has sort of been out the limelight, but it will be good to see him on the big screen again.  He was a good actor and I’m sure he still is.