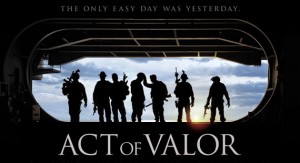 ‘Act of Valor’ is advertised as a war movie unlike any other, a movie that creates an unprecedented realism due to the fact that it stars real Navy Seals.  Unfortunately, although it did create some awesome battle sequences which were probably some of the most realistic and tactically accurate battle sequences in a military film, it completely lacked the sense of realism that it hoped to showcase.

The members of our armed forces who starred in this film did what they could to portray the heart that they have for their country and for their work.  Unfortunately, they are not actors, and this was not a documentary.  They are neither playing characters nor being themselves, and the whole thing feels wrong because of it.

Oh, and the plot.  Honestly, the plot would have been perfect for any of our 1980’s action heroes that are now starring in The Expendables.  The only message I got was “everyone except for America is evil and America kicks ass.”  And, evidently, 6 guys do all the missions everywhere in the world all the time.  This felt much more like a video game, or perhaps an attempt of an homage to Michael Bay.  All the characters are little more than caricatures and stereotypes, and their journey is painfully superficial and out of the scope of rational belief.   The antagonists are virtual replicas of the bad guy we’ve seen in movies time and time and time again.

Spoiler / Sidebar; the film opens with a brutal act of violence against children.  If you’re gonna show something like that on screen, you better either have a damn good reason, or have enough substance to follow through.  Act of Valor just didn’t.

So, yeah, kudos for the effort, and my respect to our armed forces, but if you want realism, then go with a documentary.  If you want emotion, go with a strong script with skilled actors (I’m looking at you, Hurt Locker.)  If you want a glorified two hour commercial for the military, then by all means, ‘Act of Valor’ is for you.