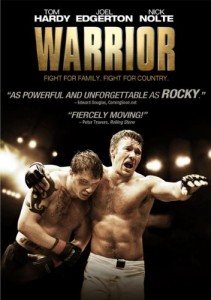 ‘Warrior’ was surprisingly a knock out with me.  I really enjoyed this film.  Tom Hardy, Joel Edgerton, and Nick Nolte were all killer in this film.  I was hoping Nolte would get an Oscar nod for his role in this.  And guess what?  He did.  ‘Warrior’ was a very inspiring film and sticks with you for a while.  I only wish this film has more push while it was in theaters.  This DVD was packed with extras.  Only wish I had received the bluray version of this.

More often than not, I don’t rush out opening day to see sports films.  And ‘Warrior’ is considered a sports film, but it has so much more depth and development to it, that you will forget it was thrown into that sports category.  The sport in question is MMA or Mixed Martial Arts.  The film follows a broken family consisting of  Tom Hardy, Joel Edgerton, and Nick Nolte.  Nolte plays Paddy who was an abusive drunk towards his family.  Present day he is in A.A. and comes home to find one of his sons on his front steps.  This son is Tommy (Tom Hardy) with whom he and his brother Brendan (Joel Edgerton) and their mother escaped the abuse  from their father long ago.  Tommy puts his feelings aside and asks his dad for help in training him for a big tournament in the MMA world with a huge payout for the winner.  Meanwhile, the other brother Brendan, has mostly made it a point to forget about his family and start a new life where e is married and has two kids.  The couple work several jobs to keep a float.  After Brendan loses his job, he decides to go for all its worth and enter in this same MMA tournament as his brother.  And the only two things Brendan and Tommy have in common are that they can fight and that they ate their father.  The two brothers have different fighting styles.  While Tommy is a hard stone hitting force to be reckoned with, while Brendan is more of a acute method of fighting in the octagon.  ‘Warrior’ is one hell of an emotional film.  Along with the fights, I got a sense of story, and mutual hatred and love out of the characters.  It’s a very powerful film and not one to be forgotten any time soon.  Definitely see this film.

While sadly I did not get the bluray version for some reason, I got the DVD and things do not look so great.  It is presented in 2.40:1 aspect ratio and there is noise everywhere.  Every exterior and interior shot has some form of noise.  It is somewhat distracting taking away from the film itself.  The film is that shaky cam 1st person feel to it, so it is hard for the film to focus and be sharp in most of it.  The film up until the last part of the film are filmed with dark moods and lighting which makes the color of the film suffer.  It’s not until the end of the film where the final fight takes place, that the movie brightens up and we se it for all its glory.  Then and only then do we get the bright vibrant colors.  Since the film is mostly dark lit scenes, the detail suffers as well.  I was hoping for a better video presentation.  The DVD has a Dolby Digital 5.1 sound mix.  The audio is far better than the video, that’s for sure.  I only wish I had the bluray version so I could hear the 7.1 sound.  The dialogue is crisp and clear and focused on the front part of the speaker set up.  The ambient noise is great.  Almost non stop with earth and people sounds.  The sound really kicks into high gear with the fights.  You will literally feel like you are in the arena.  With the crowd talking, the cameras clicking their pictures, and the hits to the face and body.  The score and music mix evenly and very well with the dialogue.  I didn’t really get a big sound of bass anywhere, btu I’m really not complaining too much about that.  A much better audio presentation than the video. 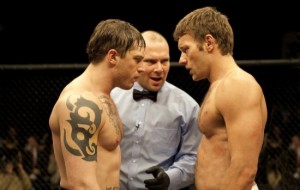 THE ULTIMATE WORD
‘Warrior’ is a solid, entertaining, and heartfelt film.  It’s by no means the best film I have ever seen, but it definitely is the best MMA film I have ever seen.  And it might be in the top sports films of recent memory.  This film has a lot going for it.  Sadly he video quality is not great on this, but the audio is pretty amazing.  And the extras are really good.  Any fan of MMA should definitely pick this up.  If the price is right, I’d say the rest of you should pick this up, because it has tons of depth and a great story to go with all the fighting.  Great flick.
-Bryan Kluger

…and for good measure the bluray.