I was totally smitten with ‘Real Steel’.  I went into the film thinking that it wasn’t going to do much for me, but I was blown away on how great this movie was.  I really enjoyed it.  The FX are top notch and it looks incredible on bluray.  The extras are pretty decent as well.  The movie warms the heart, has some very thrilling and tense fight scenes, and a bit of comedy.  This could be fun for the whole family, and it will.  I definitely recommend ‘Real Steel’.

‘Real Steel’ is such a wonderful film.  The story follows Charlie Kenton (Hugh Jackman), who is a divorced retired boxer who is trying to make money by managing and training robots to box.  Charlie has had a lot of bad luck over the years and is always on the run from people he owes money to and is always trying to make a quick buck, but ultimately always falls short.  He is notified that his ex wife has died and that his kid, Max (Dakota Goyo) which is now 11 is going to live with his ex-wife’s sister and husband.  The new parents are traveling abroad for the summer and want Charlie to take care of his son.  Charlie has no desire to do this but does because he is paid to do so.  From here, the two try to bond and get along over the robot boxing, but the relationship struggles until a near fatal accident brings Max to discover an old robot underground.  Max digs up the robot underground which turns out to be a sparring robot, meaning he can take a lot of hits, but really never dish out any big damage against his opponents.  Max starts to train his robot to box again and names him Atom.  Charlie starts to latch on to Max and Atom as well and Atom soon climbs his way to the top of the Boxing world, all the while, Max and Charlie form that father-son bond the have been missing out for 11 years.  Some of this might seem corny a bit, but honestly, it was so well done that everything falls into place nicely.  It really is that underdog story similar to Rocky.  The robots in the film are amazing.  The FX are incredible.  Nothing ever seemed fake.  I really thought there were tons of robots built for the film that moved like that.  Hugh Jackman is amazing in the film.  You really pull for him to be a baetter man and he ultimately pulls it off.  It is very gratifying.  And Max played by Dakota, does a decent job too. Nothing seemed to childish or silly.  This film was really a lot of fun.  The music in the film is really good too.  Loved the older Eminem tune they played as well as the score.  Also for you fans of LOST, you will get to see a bit of Evangeline Lilly in a cameo role.  She is good when she is on screen. 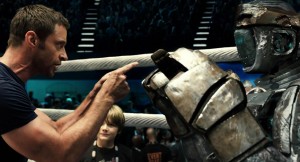 ‘Real Steel’ has pretty much a perfect 1080p/AVC MPEG-4 encode and it’s wide 2.35:1 aspect ratio.  It truly is excellent on all levels.  I saw a tad bit of aliasing, but I barely noticed it and it only showed up for a second.  Other than that, the video is flawless.  The film was shot digitally, so it looks extremely sharp, clear, full of depth.  The colors are vibrant  and shine throughout the whole movie.  The detail on the robots is astonishing.  The flesh tones are perfect and every spark that flies when a robot gets hit, you can see with perfect clarity.  The tone is warm and inviting.  A wonderful video presentation.  The audio has a very impressive DTS-HD 7.1 mix and just rocks the house.  The audio is flawless.  Not one problem with the audio.  The soundtrack is spread evenly and packs that robotic punch when you need it.  The dialogue is crystal clear with no cracks or hisses.  The action sequences are amazing when you hear the punches come across all the speakers and when it thunderstorms, it really feels like it is about to rain inside your house.  And when the robots are in the ring fighting it out and the fans are screaming their heads off, you will really feel like you are ringside watching the fight of your life.  Truly amazing video and audio presentation. 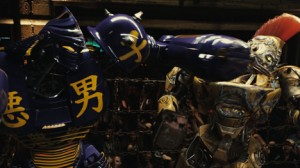 THE ULTIMATE WORD
Again, I just loved this film.  Some people thought it was cheesy and dumb, but they are surely mistaken.  Basically if you like robots and the film ‘Rocky’, you will love this movie.  This has a pretty much perfect audio and video presentation and the extras are very decent.  This is fun for the whole family and has a lot of hear to it as well.  I highly recommend picking this up. I have enjoyed it multiple times.
-Bryan Kluger