‘Back to The Future’ Might Have a Future On Broadway?!?!? 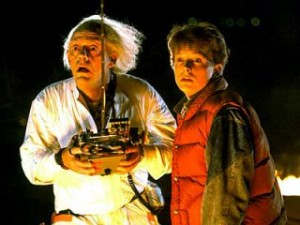 Director Robert Zemeckis is in early talks with his co-writer Bob Gale and the film’s composer Alan Silvestri to get ‘Back to the Future’ on Broadway as a stage show according to Deadline.  I believe they are talking about it being a musical, which is awesome.  Imagine the ‘Johnnie B Good’ number.  That could be excellent.  And all the 80’s and 50’s music.   This could be great.

I wonder if this venture goes through, if all three films will be incorporated in the play or if there will be three plays?  Hover boards on stage?  Biff?  The Delorean?  This could be epic.  Also, if this goes through, Rob’s production company will be involved somehow.