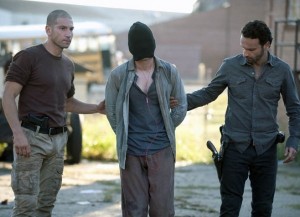 Conflict and tough choices permeate this week’s episode of the Walking Dead.  Rick lays the law down for Shane, and the two find that even the best laid plans have unforeseen hitches. The women of the farm try to save the life of one that Hershell and Maggie hold dear.

Rick takes Shane as back up to release Randall, the boy Rick rescued and now fully healed. A few miles away from camp Rick stops the car and the two have a coming to Jesus talk in the middle of a crossroad. Rick pulled no punches in which he informed Shane that he knew what happened the night Otis died, he knew about the affair between Shane and Lori and that contrary to what Shane believed, he would do anything to protect his wife, son, and his unborn child.

They continue on their way and Rick starts suggesting that begin to make preparations for the coming winter. He also theorizes that winter would be relatively safer as the cold would surely affect the walkers.

The area they decide to leave Randal is a public works station a little over 18 miles from the farm as it appears to be the safest place to give him a fighting chance. Rick and Shane exit the vehicle and kill two walkers with knives because as Rick put it, “guns are quick and easy, but there are other ways.”

They leave Randall tied in the compound with a knife within wiggle distance to free himself. The boy please with them not to leave him and starts listing off different reasons why he’s a good guy and shouldn’t be left alone. His cries fall on deaf ears until he mentions that he went to school with Maggie and knows Hershell. Shane and Rick do a 180 speculating that Randall knows where their sanctuary is located. Shane pulls a gun and fires at the boy tied helpless on the ground. The bullet narrowly misses his head because Rick pounces on Shane to stop him from killing Randall.

The resulting argument over whether or not to kill Randall right there ends in blows as Shane taunts Rick by saying he can’t protect his family. Randall uses the fight as a chance to wiggle over to the knife and begins to cut himself free of the ropes that bind his feet.  The bitter fight ends as Rick gets the upper hand only to have Shane hurl a wrench that misses Rich and crashes into a window unleashing a ravenous horde of zombies.

Shane gets separated from Rick in his attempt to flee the pursuing zombies. He takes shelter in an abandoned school bus but is unable to close the door behind him and has to brace it with his body as he tries to survive. On the other hand, Rick manages to kill one walker with his knife and then runs to find his gun. He dispatches the three walkers after him with his gun and runs into Randall attempting to get away from everything that is going on. The two make it to the SUV and crash through the gates toward the school bus and rescue Shane.

Once again, Randall is put into the back of the SUV bound and blind folded. Rick admits to Shane that he will likely have to kill the boy because he poses a danger to the farm and his family, but he needs the night to think on it. He gives a gun back to Shane and tells him that if he wants to stay with the group he needs to trust Rick’s choices and that Shane needs to come back.

Back at the farm, Lori and Maggie continue to care for Beth, who has been traumatized by the death of her mother at the barn. Beth contemplates suicide and steals a kitchen knife to do the deed. Lori discovers this and takes the knife back and attempts to tell Beth all the reasons she ought not off herself. Lori tells Maggie and she confronts her sister telling her that it would kill her and their father if they lost Beth too.

In the kitchen Andrea tells Lori she was wrong to take the knife and that if Beth wants to die she will find a way to make it happen, but if she doesn’t she needs to find her own reasons to keep living. Lori and Andrea get into an argument over the responsibilities of the women on the farm. Lori basically tells Andrea that she should leave the zombie killing to the men and to start doing more laundry.

A little later Andrea makes her way up to Beth’s room and offers to sit with her so Maggie can go get some fresh air. Andrea, alone with Beth, tells her that the pain never goes away, you just make a place for it and then leave the girl to her own devices.

Beth tries to slit her wrist with a piece of the broken mirror in the bathroom but is unable to go through with killing herself. Lori breaks open the door and she and Maggie take care of Beth’s wound.

Maggie confronts Andrea and tells her that she is not to step foot in the house ever again. Andrea tells Maggie that Beth made her choice and is alive. 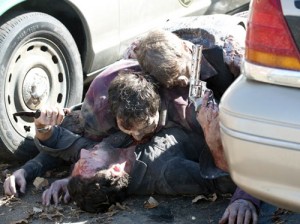 Rick: He seems to be going through a tough mental process. On one hand he is still clinging to old thought patterns and ways of doing things, holding on to what he believes to be that last shred of humanity. You can tell he is conflicted about how to keep his family safe and the new world which he has been thrown into. His conflict comes from the old way of doing things in a world where the dead didn’t eat you and the new world where at times you must kill the living to protect one’s family. I love how he still takes the time to think about things instead of acting on impulse. How he still weighs the choices against what he perceives to be right and wrong. That being said, there are times he seems a bit flat and one noted. But especially in this episode he has shown he can and will do what needs doing in order to keep his family safe.

Shane: I can’t help but like this bad boy. He has embraced the zombie-fied world and will do anything to keep Lori and Carl safe. Yes, he’s a bit unstable but even the most despicable things he’s done, in his mind he is in the right and will not back down. This week you could see his own inner conflict as the Shane he had once been surfaced for the briefest of moments during the talk with Rick at the cross roads. As they drove in the car and he only half listened to Rick, you could tell he was struggling with his thoughts. And at the end of the episode he is at the proverbial cross roads. Does he continue down the dark path he’s been walking, or does he come back to the light so to speak?

Lori:  Her perceived roles of men and women in the zombie apocalypse are just sickening. In a zombie apocalypse everyone needs to be on watch for the undead. Lori thinking Andrea is selfish because she’d rather be on watch, doing her part to keep the camp and farm safe, than do laundry screams of jealousy in my humble opinion.

Andrea: Her methods may be questionable but they got results. She used her own suicidal experience to help Beth even if Maggie was to blinded by anger to see. Andrea held her own against Lori’s verbal attacks and even got a few shots of her own in. 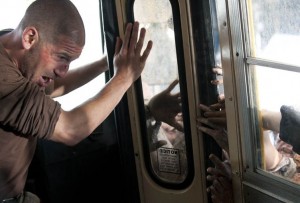 A few things reached a boiling point and I for one am glad to see things between Shane and Rick happen the way they did. Yes, I’m totally serious; their fight has been coming for a long time. The frustration for both of them, so much that had been left unsaid, all got said tonight. And in typical male fashion the proceeded to kick the holy living hell out of one another. I’m hoping that they finally come to an understanding and they are able to meet at a common ground on how things are to be handled. Though, that being said, Andrea and Lori’s conflict is far from over. I believe we have only glimpsed the tip of the ice berg. I believe that Lori is threatened by Andrea’s independence. Andrea refuses to fit in the roles of men and women that Lori recognizes as set.

The episode as a whole was enjoyable and asked many moral questions to the audience. I was on the edge of my seat throughout Rick and Shane’s scenes, and just wanted to smack Lori. I am looking forward to seeing what Shane does with the options that have been placed in front of him He is at a literal crossroad in his life. Will he go more into the dark or with the Shane of old resurface?