‘The Office’ Getting a Spinoff Series Starring Dwight Schrute!?!?!? 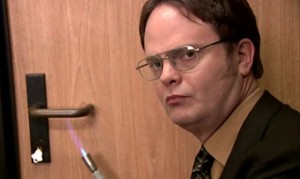 Bears.  Beets.  Battlestar Galactica.  For a while now, ‘The Office’ star Rainn Wilson (Dwight Schrute) and executive producer/showrunner Paul Lieberstein have been toying with the idea of  an ‘Office’ spinoff series, and now that might happen.  No final deals have been made just yet, but they are getting to that point.  NBC is hoping to finalize everything and get this new spinoff show out by mid season 2013.

The series will have Dwight (Wilson) living at the Schrute family beet farm and bed & breakfast and trying to run the farm.  We’ve seen Dwight’s beet farm in previous episodes, and I must say to have an entire series centered around Dwight running his beet farm would be very comical.   “Paul and Rainn have been joking for years about Dwight’s life on the farm, his family and how ill-suited he is to run a B&B,” a source close to The Office said. “A while ago, it started to feel like a show to them. NBC agreed, it’s been further developed to include multiple generations, many cousins and neighbors. (It is unclear if that would include cousin Mose who has been featured on the show, played by Office alum and Parks & Recreation co-creator Mike Schur.) At its base it will be about a family farm struggling to survive and a family trying to stay together.”

I’ll keep you posted when this gets greenlit.