Sarah Silverman’s New NBC Series Gets a Couple of Actors!!! 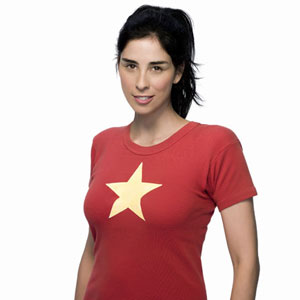 Funny and hot girl Sarah Silverman has a new series gearing up for NBC which is currently untitled, got a couple of actors to star in the show.  Or at least the pilot anyways.  Harris Wittels, who was a writer on Silverman’s Comedy Central series, will play Harris Wittels, a version of himself, in a role created for him. Also cast is June Diane Raphael whose writing credits include the feature comedy ‘Bride Wars’.

“The untitled single-camera comedy, from 20th Century Fox TV and Imagine TV, is loosely based on Silverman’s life and stars the comedian as Susan, a woman readjusting to the single life after a decade-long live-in relationship. Wittels’ Harris Wittels is a short, hipster, endearing and good-natured tenant in Susan’s building who happens to be a huge fan. Raphael will play Chelsea, an attractive, smart tenant in the building who was once Susan’s best friend until Susan disappeared into a relationship ten years ago and hasn’t called her since. ”

I am a huge fan of Silverman’s and loved her Comedy Central series.  I wish this the best and look forward to the series.  Hopefully Jimmy Kimmel will make a cameo on the show.