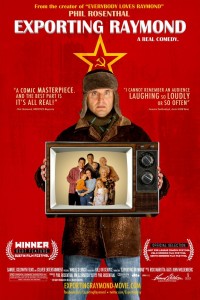 The comic feature-length documentary EXPORTING RAYMOND, the story of how “Everybody Loves Raymond” creator Phil Rosenthal attempted to adapt his Emmy®-winning series for Russian TV, debuts THURSDAY, FEB. 16 (8:00-9:30 p.m. ET/PT), exclusively on HBO.  When Phil Rosenthal was asked to help adapt “Everybody Loves Raymond” for Russian TV, he made eye-opening discoveries about the country’s viewers and their similarities to (and differences from) U.S. audiences.  EXPORTING RAYMOND recounts his often-hilarious 2009 trip to Russia, chronicling the casting process, the shooting of the show and meetings between Rosenthal and his Russian counterparts.

The documentary shows how the Russian production comes with its own pitfalls and tests, which end up being similar to American production challenges.  In addition to making friends, Rosenthal and the Russian creators and executives eventually come to understand each other’s motivations, desires and reasons for their creative choices, despite the obvious culture and language barriers.

“The mission to Moscow was not without peril and a very real sense of danger,” says Rosenthal.  “You could say I was the James Bond of Jewish television writers.”

Phil Rosenthal was the creator of the hit comedy series “Everybody Loves Raymond,” starring Ray Romano, which ran for nine seasons and received 15 Emmy® Awards, including Best Comedy Series in 2003 and 2005.

He also co-wrote the Peabody Award-winning 9/11 telethon “America:  A Tribute to Heroes” and received a 2002 Writers Guild Award for Excellence in Television Writing (Episodic Comedy) for the “Everybody Loves Raymond” episodes “Italy, Parts 1 & 2.”

In addition, Rosenthal has the distinction of having directed President Bill Clinton in the White House Correspondents’ Association Dinner video, which was shown to wide acclaim at the April 2000 event.