Learn What Happens on the Third Season of ‘Eastbound and Down’!!! 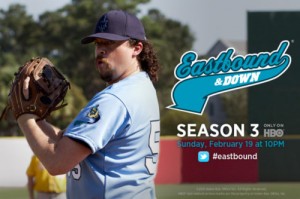 After fleeing his North Carolina hometown, washed-up major-league pitcher Kenny Powers spent a soul-searching season in Mexico as “La Flama Blanca” – and ended up returning to the States a changed man.  Or is he?   Find out when the comedy series EASTBOUND & DOWN, executive produced by Will Ferrell, Chris Henchy, Adam McKay, Jody Hill and Danny McBride, kicks off its eight-episode third season SUNDAY, FEB. 19 (10:00-10:30 p.m. ET/PT), exclusively on HBO, just as real-life baseball spring training begins.  The new comedy series “Life’s Too Short” debuts immediately after the season debut at 10:30 p.m.  Jason Sudeikis joins the cast this season.

Starring Danny McBride (“Pineapple Express,” “30 Minutes or Less”), EASTBOUND & DOWN tells the story of Kenny Powers, who used to be a star pitcher until his self-destructive behavior knocked him out of Major League Baseball.  Picking up a year after season two, the third season finds Kenny in action on the “Redneck Riviera” (aka Myrtle Beach, SC), somehow resurrecting his baseball career by becoming the closer for the minor-league Myrtle Beach Mermen.  Even as he tries to pass himself off as the “King of Myrtle Beach,” Kenny struggles to come to terms with growing older and accepting the responsibilities of being a new father.

Enjoying a new lease on his baseball career as the closer for the minor-league Myrtle Beach Mermen, Kenny Powers (Danny McBride) settles into a life of body-boarding, jet-skiing and hard-partying with his catcher, Shane (Jason Sudeikis).  A detour to Shelby to attend the one-year birthday of his child reunites Kenny with April (Katy Mixon).  Written by Jody Hill, Danny R. McBride & Josh Parkinson; directed by Jody Hill.

This season’s episodes were directed by David Gordon Green and Jody Hill, both of whom also directed episodes of the first and second season of EASTBOUND & DOWN.

The seven-episode second season of EASTBOUND & DOWN, which concluded in Nov. 2010, followed Kenny on his adventures in Mexico as he played baseball, made new enemies, reconnected with his deadbeat dad and smuggled Stevie’s Mexican girlfriend back into the USA on his return.  The hit season inspired critical praise, with Entertainment Weekly saying that the show “continues to amaze,” while the Huffington Post called it “hilarious.”  The New York Post called the series “very funny,” and Rolling Stone hailed Kenny Powers as “an American anti-hero for our troubled times.”  Danny McBride was named Comedy MVP for his role as Kenny Powers at the 2011 Spike Guy’s Choice Awards.