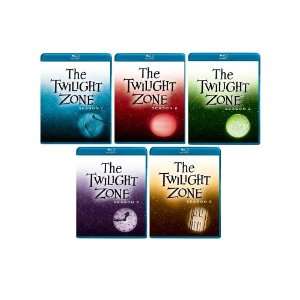 Happy New Year everyone.  I hope all of you had a blast at your NYE festivities and all got home safely.  2011 was a great year and I imagine 2012 will be even better.  So in the spirit of the new year which seems to be a tradition, the original ‘Twilight Zone’ series runs back to back episodes for almost 48 hours.  So of course the ‘Geek Deal of the Day’ is going to be the complete series of ‘Twilight Zone’.  And let me tell you….this is the CHEAPEST ‘Twilight Zone’ ever!!!  Both the DVD and Blu-ray sets are a whopping 69% off.  Take advantage of this amazing deal!!!  It only lasts till midnight.  This is the greatest television series of all time.

Includes all 156 complete episodes from Rod Serling’s groundbreaking series, presented in pristine high-defnition for the first time ever, along with hours of new and exclusive bonus features not available anywhere else!

Highlights from the Museum of Television and Radio Seminar