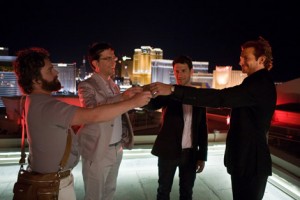 Well negotiations are just about done to get filming started on the third ‘Hangover’ movie.  This has been going on for a few months due to the big salary demands for the three actors; Ed Helms, Zach Galifianakis, and Bradley Cooper.  Supposedly they are asking for $15 million each plus backend money.  As the dealings are just about wrapped up, they are most likely going to receive what they are asking.

I’ve heard this third film will deviate from the formula of the past two films and center on Galifianakis’ character and an attempt to rescue him from a mental hospital.  But that is only rumored.  I welcome a new premise to this series to liven it up a bit.  The studio hopes to start shooting this summer and be ready for a Memorial Day 2013 release.