With the start of a new year at Classic Waxxx HQ there are large stacks of incredible vinyl to sort through that was obtained over the holidays. Rock n’ Roll, Jazz, Country, Bluegrass and the like all wait to be played and shared. It’s such a treat to discover new music by groups loved and practically unknown, and with another year come and gone it means there is just more music out there that needs some attention. 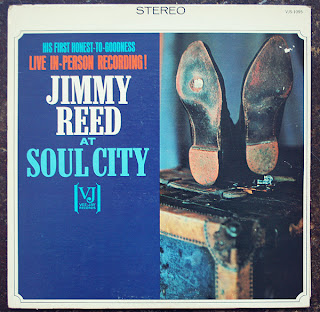 It was a difficult decision to pick the new year’s first record review, but Jimmy Reed’s “At Soul City” LP snuck in from left field for several reasons. First of all, I love blues records. Maybe more than most other records in the CW collection. I also love live recordings, and especially live blues records. But, I do have a little bone to pick with Vee-Jay Records for their release of “At Soul City.”

Despite what the cover says, this is not an ‘Honest-to-Goodness’ live recording. It’s not even close. What this LP actually is is a string of Jimmy Reed hits with crowd noise overdubbed. You know how I can tell? There are several ways. Reed and his band sound like they are in the studio. The vocal performance, the guitar playing, everything sounds clean. They don’t sound like they are playing in a club or coffee house. Reed doesn’t showboat on these recordings like most blues guitarists would playing live, or even introduce the songs he’s playing. The crowd cheers at odd points during the music, and the applause comes in a beat too late after the music fades out. The music fades out?!? Yes, when was the last time you heard a band’s music fade out after what should be a bull of a performance? Exactly. 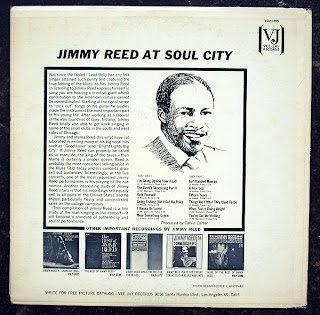 I was initially suspicious of the record being a live recording before even playing it, thanks to the track listing. The record opens with the songs “I’m Going Upside Your Head” and “The Devil’s Shoestring Part II,” an A and B-side single I’ve had for years, one that I’m quite fond of. Those performances are not ‘live’ in the sense “At Soul City” is, I’m afraid. Additionally, the time stamps on all the songs are very close, 2:30 on average, like what you’d find on a 45RPM single. Real live versions of these songs would obviously be longer in length.

This record also tips its hand by not even really talking about the performances on the sleeve jacket, except for the one sentence paragraph at the end. Ultimately, this record just serves as another attempt to repackage existing material to the unknowing consumer. However, after a listen and knowing the crowd noise is overdubbed, much in the same manner as The Rolling Stones’ “Got Live If You Want It” record, “At Soul City” turns out to be quite annoying to listen to and not worth the effort to buy. The poor attempt to make the public believe this is an ‘honest-to-goodness’ live record makes me actually feel like I received a crappy Christmas gift, but the limit on making a return/exchange has already passed, and I’m stuck with a dud. Granted, I can still look past the annoying filler of the overdubbed crowd noise and enjoy the music by itself, but in the long run it would make more sense just to play all the singles “At Soul City” is comprised of and have a greater and more pleasurable listening experience. 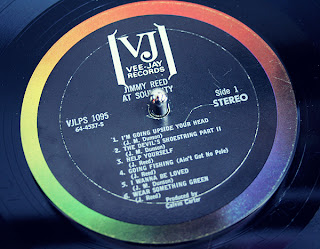 I don’t normally trash talk a record by an artist I admire, but I don’t get the feeling Reed had much to do with this release. Again, it was probably the brainchild of an A&R man at Vee-Jay to shift some more vinyl. “At Soul City” turns out to be just another instance of ‘buyer beware’. Should you be interested in a real deal Reed live record, check out his ‘Carnegie Hall’ performance from 1961.

I at least have to give props to cover designer George S. Whiteman. The record still looks like a groovy record to play from the outside, though I still have to call ‘bullshit’…

On a side note, I hope all you music and vinyl fans out there had a wonderful holiday season and are looking forward to great and rewarding possibilities in 2012. Should you need an additional Classic Waxxx fix during the week between write-ups, be sure to check out the new Classic Waxxx Tumblr page for a visual feast of awesome records from around the world.

One thought on “Classic Waxxx: Jimmy Reed “At Soul City””