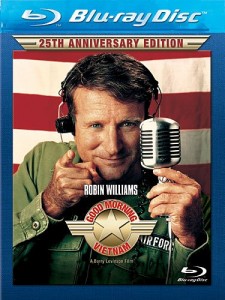 Twenty five years later, ‘Good Morning Vietnam’ still holds up as one  the best films about Vietnam and most certainly one of the top Robin Williams films of all time.  I can’t believe it has been twenty five years.  I actually remember seeing this in theatre with my parents and just loving Robin Williams’ based on real life person Adrian Cronauer.  Over the next couple of years I memorized all of Cronauer’s radio monologues and performed them in front of people at a young age.  I can still recite them to this day.  Needless to say, ‘Good Morning Vietnam’  holds a special place in my heart.  And this 25th anniversary bluray is a hit.  Some great extras, and great HD presentations in video and audio.  This is definitely worth picking up.

You’ve most likely seen this movie, and if you haven’t then you’re gonna want to.  ‘Good Morning Vietnam’  follows radio deejay Adrian Cronauer played by Robin Williams who gets assigned to do the morning show for the US troops in Vietnam in the 60’s.  Cronauer’s ultra unorthodox music choices and comedy bits quickly earn him the love and respect of the troops, but puts him on the proverbial “shit list” of the conservative military officers.  While in Vietnam, Cronauer becomes entranced by a local girl and wants to get to know her.  He ends up following her to a classroom where a group of natives are learning English.  Cronauer takes over as teacher to get closer with the girl, but is stopped short by her brother.  Cronauer becomes friends with her brother, but later on realizes he is a spy for the enemy.  On top of that, he is hassled at every corner by two military superiors for his nonconformist radio show, until ultimately he is fired and let go.  One of my the best scenes in the movie, is where a somewhat emotionally drained and beaten Cronauer has given up trying to fight the asinine rules of the military officers, and one of his assistants (a young Forest Whitaker) tries to get Cronauer back on the air.  While in traffic in Vietnam, they pull up to several military convoys transporting many US troops.  Cronauer’s assistant yells to the troops that he has Adrian Cronauer in the car.  So Cronauer gives his famous “Gooooooood Morning Vietnam” line and the troops go insane with joy.  Cronauer proceeds to do some comedy for the troops and he realizes he really is making their days better in the crude world of war.  It is an amazing scene.  The soundtrack for the film is out of this world.  Featuring rock n roll hits from top artist from the 60’s, the music will make you get up out of your seat and groove.  ‘Good Morning Vietnam’  is packed with great comedy, plenty of laughs, and some real dramatic moments involving betrayal and war.  This is one of the best Robin William’s films and I’m so happy it’s on bluray. 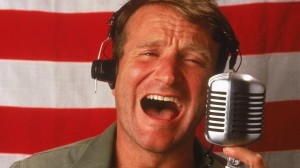 The video has that glorious 1080p transfer and is presented in its original 1.85:1 aspect ratio.  The movie looks great.  The colors pop and are vibrant throughout.  THe blacks are deep and inky and the flesh tons are spot on and natural.  I did not notice any noise or edge enhancement.  The movie’s filmic quality seems to have gone, but I think that’s a good thing.  It looks polished and clear.  The best this movie has ever looked.  The exterior shots of the jungle just pops.  Great video transfer.  The audio has a DTS-HD 5.1 mix and sounds pretty good.  It seemed like the soundtrack was more front heavy for being a 5.1 track, but some of the more action sequences and the explosion made all the speakers rumble.  But this is more of a dialogue driven film than anything and it sounds crisp and clear. There was no evidence of cracks or hissing.  Great job here. 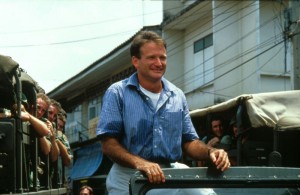 THE ULTIMATE WORD
‘Good Morning Vietnam’ was an instant classic back in the 80’s and still remains a classic today.  Robin Williams is fantastic in this film.  It’s got wit, heart, soul, and enough laughs to go around for everyone.  The film’s soundtrack is out of this world of some of the finest rock n roll music from the 60’s.  This is the best the film has ever looked and the extras are a lot of fun.  I highly recommend ‘Good Morning Vietnam’ to anyone.  Great price too.
-Bryan Kluger