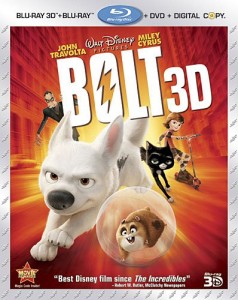 Disney’s ‘Bolt’ arrives on 3D Blu-ray and packs an extraordinary punch with its amazing video and sound.  Not to mention the story for the most part is terrific.  It almost seems that ‘Bolt’, while being strictly a Disney animated film, has a hint of that ‘Pixar’ awesomeness in it.  I was pleasantly surprised by this film on how great it was.  My advice is to pick up ‘Bolt’.  You will be happy you did.

‘Bolt’ on paper seems to be a story you have heard and seen before many times.  A dog and his owner are separated across country and the dog makes a trek to find its owner.  There is much more to this story than that.  Bolt is actually a dog actor that stars in his own show called ‘Bolt’.  The other main actress of the show is Penny, who is his co-star and actual owner.  The television show follows Penny and the evil schemes of the dreaded mean Dr. Calico.  In every episode, ‘Bolt’ saves the day at the last minute with his super powers.  In focus groups for the show, people complain that the show is way too predictable so the execs decide to do a season cliff-hanger to end the season where the evil Dr. Calico kidnaps Penny.  This might seem all well and good, but Bolt thinks this is all really happening.  He has never been aware that this is all a television show and that everything is pretend.  Bolt actually thinks he has super powers. Bolt and Penny become separated on the journey from New York to Hollywood and Bolt thinking everything to be real (like Penny being kidnapped), Bolt sets out to rescue Penny across the USA.  He soon realizes he has no superpowers.  From here on out he meets some excellent animal characters along the way that help Bolt on his mission.  Bolt also comes to terms with who he is and that his whole life has been a lie.  And he has to determine if Penny’s love for him is fake as well.  ‘Bolt really is an excellent film.  It’s so heartbreaking to watch your pet have so much loyalty and love for you on film or in real life.  I love that they show that in this film.  I thought that the voice of Bolt (John Travolta) was weird, but I got past it.  What a wonderful surprise of a film. 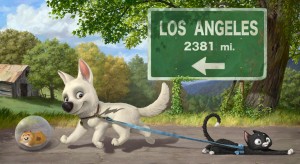 The video is presented in 1.78:1 with a glorious 1080p transfer.  The detail in the film is superb.  It’s uncanny.  The hair on the animals and cityscapes are brilliant.  The textures and shading are out of this world.  The black are deep and inky and the colors are very vibrant.  There was no noise or artifacts in the film.  The 3D was quite impressive.  It was not overly done and had quite a bit of jump at you moments that everyone will enjoy.  The depth struggles here and there, but the detail and 3D make up for all of that.  There is a small speck of ghosting and aliasing towards the beginning of the film but it fixes itself.  Truly a great video presentation.  The audio has a DTS-HD 5.1 mix and sounds incredible.  It’s fun, loud, and action packed.   I can easily say this is demo audio material.  The disc does an impressive job with all the ambient noises on thall the speakers, and the bass comes a rumbling in the action scenes.  The dialogue is evenly presented on the front speakers crisp and clear.  Fantastic audio presentation. 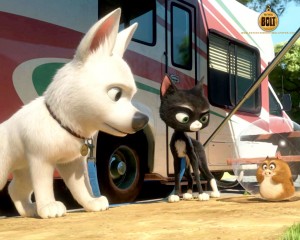 THE ULTIMATE WORD
There has been several editions of ‘Bolt’ that have been released over the past few years.  If you already own an import or a previous bluray, you will have all of this minus the 3D.  Disney seems to have really done nothing extras for this release besides the 3D.  So if you already have the bluray and do not have a 3D tv, then wait till this goes on sale.  But if this movie is new to you, DEFINITELY purchase it.  It is worth it.
-Bryan Kluger