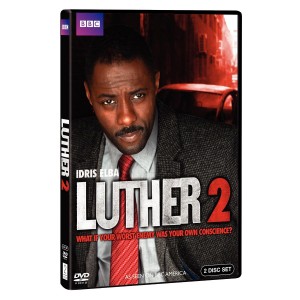 I never heard of this series before I got it for review.  But I did know of the actor Idris Eba.  Idris is best known for his role as Stringer Bell in HBO’s The Wire.  And I must say that other than Stringer Bell, this series ‘Luther’ Elba’s character might be just as good as Stringer Bell.  John Luther is AWESOME  in this self title series.  Sadly, I never saw the first series, but only this second series which is only a very short four episodes.  That’s weird.  And I hear Luther has been renewed for  third season.  They must do things differently over in the UK.  But this is a solid series.  A great dark and adult mystery revolving around psychotic killers.

Let me just say that this series is HARDCORE.  HARDCORE in the sense of it gets pretty dark really fast.  Some insane situations and murder cases.  There are two cases in the 2nd series each spanning two of the four episodes.  Luther is still dealing with the death of his wife from the previous season where she was killed by a psychotic murderer.  And he is on the brink of insanity and suicide when he gets a new case that involves some weird killings involving a person in a punch mask.  While all of this is going on, Luther tries to save a friends kid from the dangerous underground world of sex and drugs.  Time is ticking for Luther to catch this crazy killer their next killing comes to be which involves numerous kids.  Then in the latter two episodes, Luther is put on another case that seems to be hate crimes and at random.  But there is a twist to this one.  It involves twins.  I won’t give too much away, but it really took my off guard on how good this series is.  Very impressed.  And Idris Elba is AMAZING in this.  Like I said before, it comes very close, if not on the same level as his Stringer Bell character.  See this.

This is a standard DVD release so not hi-def here, but it still looks quality.  It is in 16:9 enhanced ratio and has a stereo mix.  I really hope this catches on in the states.  This could totally compete with Dexter.  I also would love to see this in hi-def with a killer audio mix.  The audio/video is as good as it can be for being in the UK and on DVD.  Not demo worthy by any means.

Get this series.  It is haunting, scary, and a lot of fun.  Idris  Elba is badass in this role and it really proves that he needs to be a leading man in Hollywood.  There is some really dark stuff in here for you horror and mystery fans.  I can see Luther becoming a cult character.  Yes he is that AWSOME.  Get this DVD.