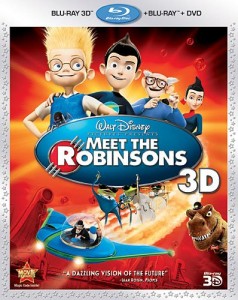 ‘Meet the Robinsons’ is a surprisingly great little family film.  This is a Disney CG animated film not done by Pixar, but don’t let that stop you from seeing it.  This 3D bluray release is also just as good as the film itself.  I’ll be honest, I wasn’t expecting much from this movie, but I’m very happy with it.  Not only will kids enjoy the film, but adults will too, as I did.  This release marks yet another re-release for Disney with their amped up 3D collection.

While this may not have that special and adult like sense of a Pixar film, ‘Meet the Robinsons’ still met my expectations of a quality film which anyone could enjoy.  I mean there was a 2001 A Space Odyssey reference in the film.  I was hooked on that alone.  But this is a great story.  The film follows an orphan named Lewis who is a clever inventor of sorts who scares of his potential adoptive parents time and time again because of his inventions.  He’s come to the conclusion that he will be alone and nobody will love or accept him for who he is.  Things take a turn in Lewis’ favor when he meets a kid named Wilbur Robinson who takes Lewis on his stolen time machine and they set off for the future.  Here Lewis meets Wilbur’s family and he finally feels for the first time in his life that he fits in.  But after a short time, it is made clear that Lewis can’t be in the future as there is an evil mad man after them and take the time machine and alter the universes time line for the worst.  Plus they have to find a way to get Lewis back in his own time.  This was a fun as hell movie.  There time travel, dinosaurs, singing animals and robots all rolled into one film.  I think ‘Meet the Robinsons’ proves that Disney can make a decent CG animated film without Pixar.  I’m curious to see what else they produce.  This was really good. 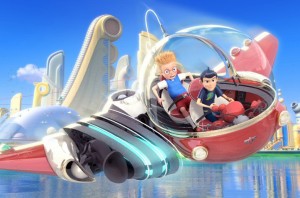 The video is pretty impressive.  It is better than some Disney 3D titles and not as good as others.  With this film being converted to 3D, the added dimension really did good things for the film.  There are quite a lot of fun pop out moments in the film but sadly not a whole lot of depth in scenes.  Towards the end of the film, the video quality gets a little worse for the wear.  There is some minor aliasing and ghosting here and there but very minor.  You probably won’t notice it.  One of the best scenes for 3D in the film was a fireworks scene.  That was AWESOME.  All in all, the video presented in 1080p was sharp, crisp, and clear.  THe blacks were deep and inky, and the tones and shading were all incredible.  Pretty well done.  The audio has a DTS-HD 5.1 mix and does its job.  The dialogue flows freely on the front speakers and the full surround sound and rear speakers pick up the ambient sounds nicely.  The action sequences pack enough bass and the score sounds wonderful on the system.  Solid audio here. 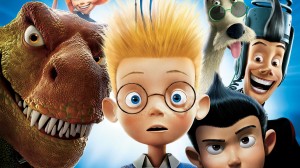 THE ULTIMATE WORD
Overall, ‘Meet the Robinsons’ is an intelligent and fun time travel film great for the whole family.  And it has a lot of heart and soul in this little film too.  Both kids and adults will get a kick out of it.  The audio and video is almost demo quality, but not quite there.  THe 3D is fun n certain moments and the extras are worthy of praise besides the music videos.  I do recommend this film for the entire family.  Lots of great characters and fun will be had viewing this.  Great job Disney.
-Bryan Kluger