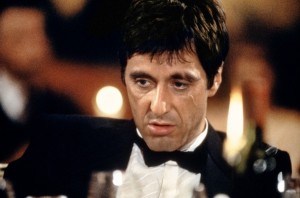 That’s right.  Universal has hired David Ayer to write the script for the updated version of Scarface.  We wrote about this a month or two ago about how this Scarface won’t necessarily be a sequel or remake, but rather just and updated version.  The film will put a new spin on the outlaw tale first released in 1932 with Paul Muni playing an Italian who took over Chicago, and then turned into the ultra violent 1983 film that starred Al Pacino as Tony Montana, a Cuban who took over the cocaine trade in 1980s Miami.

The new film is being produced by Marc Shmuger and  Martin Bregman, who produced the Brian De Palma-directed version. “When the studio set up the project in late September, the intention wasn’t to do a remake as much as to marry the common elements of the two films with a contemporary crime context. Basically, the focus is on an outsider, an immigrant who barges his way into the criminal establishment in pursuit of a twisted version of the American dream, becoming a kingpin through a campaign of ruthlessness and violent ambition.”

Ayer says… “This is a fantasy for me, I can still remember when I saw the film (1983 version) at 13 and it blew my mind,” he said. “I sought it out; I went after it hard. I see it as the story of the American dream, with a character whose moral compass points in a different direction. That puts it right in my wheelhouse. I studied both the original Ben Hecht-Howard Hawks movie and the DePalma-Pacino version and found some universal themes. I’m still under the hood figuring out the wiring that will translate, but both films had a specificity of place, there was unapologetic violence, and a main character who socially scared the shit out of people, but who had his own moral code. Each was faithful to the underworld of its time. There are enough opportunities in the real world today that provide an opportunity to do this right. If it was just an attempt to remake the 1983 film, that would never work.”

I’m sure this will make tons of money, but how will it stack up to the Al Pacino inconic film?  Time will tell.  I’m curious to see who will direct and star in the film.  This could make someone’s career for a lifetime.  Your thoughts?