Lockbox To Steal Your Soul!!! 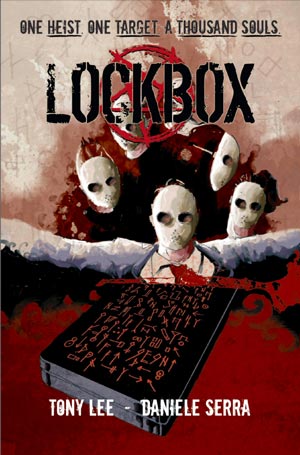 1821 Comics, bringers of Missing Linx and Warlords: Brotherhood, have released the preview of their next project: Lockbox, the story of a bank heist gone terribly wrong.

Lockbox is meant for mature audiences, and it’s obvious even within the 8-page preview. You know, judging by the guy getting half of his head blown off towards the end. Oh, and the use of old racial slurs every two sentences. The story starts with a meeting of various naughty people looking to steal a certain lockbox, then switches to the present heist. As it progresses, the reader learns that the box is carved with sigils and wards. It turns out that the box is actually the holding cell for the souls the Devil has collected…and he’s not too big on having it stolen.

Tony Lee (who has written various comics for both DC and Marvel) does an excellent job of keeping the suspense up and grabbing the reader’s attention. The preview ends with the aforementioned head-blown-up guy getting up and smirking. SMIRKING. It’s kind of awesome.

This reporter is looking forward to the title hitting the shelves on November 30th.

The preview is available at www.1821comics.com