FedMex Reviews ‘Paranormal Activity 3’ And is Scared Out of His Mind!!! 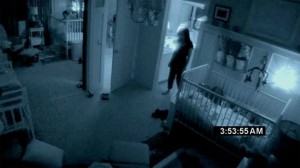 As it turns out, post halloween is the best time to watch this movie and not have a crowded theater.  In case anyone was still wondering whether or not this is worth watching….here goes.

I never saw Paranormal Activity 2 and was ultimately probably hurt by it.  I was definitely a fan of Paranormal Activity when it first came out.  It re-introduced the “salvaged footage” genre in the horror scene, and it did it well.  I heard mediocre things about the sequel, but I also understand that there’s some underlying plot thread that I must have missed out on, and this is pretty much reflected in the first 10 minutes or so of Paranormal Activity 3.  I gather that the movies seem to chronicle a few characters over the course of their lifetimes in backwards continuity.  Honestly, I have no idea nor do I think it’s too important for the ultimate result.

That result being, of course, a helluva creepy film.  There isn’t really anything new here, it’s just a fun ride about which devices are gonna scare you this time.  As far as what’s been available in the horror genre recently, I’d say this was a nice little addition to the “let’s get scared for a bit” category.

What I enjoyed so much about the first film and what was reproduced well in this film is a very simple formula, no big budget, little CG, and just some genuinely creepy scenes.

Wish there was more to say, but bottom line, it’s another story of a guy that puts cameras up and ghost shit happens, and really, that’s all it needs to be.  It’s like the Saw movies, you know, the same stuff happens each time and you just watch to see how they do it this time, but, unlike the Saw series, this one can actually produce good sequels.