FedMex Gets Stoned and Reviews ‘A Harold and Kumar Christmas’!!! 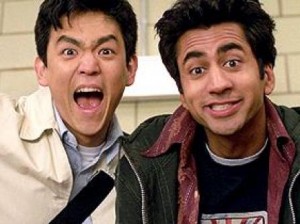 You know what’s the best part about Christmas?  Marijuana.  I’m tempted to stop there because that’s really as in depth as we need to get, but let’s go forward.

This is yet another movie where I missed the intermittent sequel between the first and third movies, but, because it is Harold and Kumar, it doesn’t matter.  We have a modern day Cheech and Chong, full of pot jokes, gross out humor and the necessary ethnic jokes, oh yeah, and nudity, because nudity is funny too.

I’ll be honest, I giggled throughout the whole movie, and I was sober.  It’s pretty damn funny just in the extent of its ridiculousness.  There’s a really loose plot somewhere about saving a Christmas tree, and something about friendship, but no, nothing makes sense, and it really just comes down to…