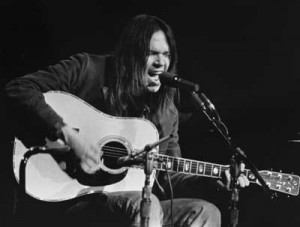 This past May, Neil Young drove a 1956 Crown Victoria from his idyllic hometown of Omemee, Ontario to downtown Toronto’s iconic Massey Hall, where he played the last two nights of his solo world tour. Filmmaker Jonathan Demme was on hand to capture the journey and both shows, highlighting new songs from the album Le Noise (2010), produced by Daniel Lanois, mixed with classics like “Ohio” and “I Believe in You” and previously unreleased songs “Leia” and “You Never Call.”

In NEIL YOUNG JOURNEYS, Young’s mesmerizing performances are presented in full, along with passages from the sometimes funny, sometimes wistful ride into town. Demme and Young previously collaborated on two other performance films, Neil Young Heart of Gold, which chronicled Young performing in Nashville, the year after he survived a brain aneurysm and Neil Young Trunk Show, which memorialized a Pennsylvania concert during Young’s “Chrome Dreams II” tour.

“I’m joyful about SPC becoming the distributor of NEIL YOUNG JOURNEYS. I had a blast working with them on RACHEL GETTING MARRIED recently so this is just a great homecoming for me,” states Director Jonathan Demme.

“With their latest collaboration, Neil Young and Jonathan Demme are a match made in movie heaven,” adds Sony Pictures Classics.