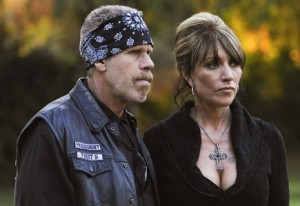 The hit FX television series has been renewed for Season Five. Starring Charlie Hunnam (Children of Men), Ron Perlman (Hellboy), and Katey Sagal (Futurama), the season will have 13 episodes.

Season Four of Sons is one of the most successful and popular programs on basic cable, with millions of viewers tuning in every episode. There are seven episodes to go, and as the ratings have been consistent from week to week, they will be well-watched. Season Five is going to cause a lot of excitement.

For those who don’t know, Sons of Anarchy is about the vice-president (Hunnam) of an outlaw motorcycle club in California. The club confronts more of the town’s seedy underbelly than the cops do, from drug dealers to corporate developers. They do run a legal automotive shop, but the club’s main income stems from a thriving arms business.

Hunnam’s character begins to grow apprehensive towards the club’s illegal activities, and thus starts to doubt himself. There to support him are his mother (Sagal) and stepfather (Perlman), but there are dark secrets within the family that could tear them apart.

The show was created by Kurt Sutter and is produced by both FX and Fox 21. Stay tuned!