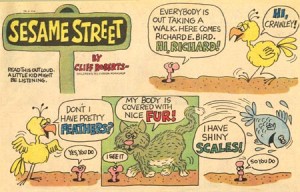 Let me get this straight. Sesame Street, aimed at pre-K children who have not yet learned to read, is in negotiations to make comic books.

Supposedly, the books will be both educational and entertaining. If the project goes through, they will be available in both print and digital formats. The comics will feature the beloved characters from Sesame Street and will be produced by Sesame Workshop and Ape Entertainment.

Now, I’ve been reading comic books since I was probably 6 or 7, but I was in school and well past my Sesame Street days. Scooby-Doo, Batman (the ones based on the animated series), Superman (same), Teenage Mutant Ninja Turtles, Sonic the Hedgehog. They were colorful and fun and all kinds of kid-friendly, but here’s the kicker: my parents did not have to read them to me. Nor, I imagine, did they particularly want to when there were tons of nourishing actual BOOKS to choose from.

These days, comic books have been getting a bad rap based on the fact that most titles are not actually for the kiddies (never mind the fact that the twelve-year-old I met in the park the other day was planning on going home to watch Watchmen – priorities, people.) I can see why some well-meaning mogul might think to themselves, “Why, my children should be able to read comic books as I did at their age!”

It’s the “read” aspect that keeps tripping me up. Sesame Street has lots of board books and noise-making read-alongs published; those are lovely things to read to the kiddo that isn’t quite at that level yet. However, most kids drift away from Sesame Street at about the age that they actually start reading because they already know their numbers and ABC’s. They’re done with Elmo and his moving house, Big Bird and his imaginary friend, Oscar and his perpetual hangover (“oh God get away from me shut the lid aaaaagh the light!”), Bert and Ernie and their flaming gay relationship (interject political view: REALLY, people?).

Around the age of five, they have no use for these characters anymore – they’re moving on to Batman. And you should let them, because Batman is the best. Great moral standing, responsible, good with money…oh, hey, getting off-topic. Different story for a different time.

Now, I could be going off on this tangent for nothing. Maybe parents will decide that comic books for three-year-olds are lovely things, and will be willing to read them aloud in addition to the board books. After all, who wouldn’t be all for starting a new generation of nerd really early (which is what I was thinking when I bought Star Wars ABCs for my one-year-old nephew)? Still, we’ll have to wait and see. This could go either way.