See What Happens on the Next Few Episodes of HBO’s ‘Enlightened’!!! 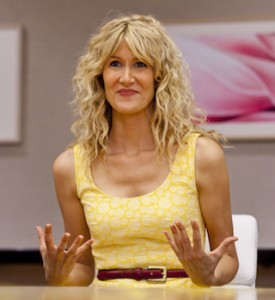 Enlightened follows the story of Amy Jellicoe, a self-destructive executive, who, after a very public breakdown and a subsequent philosophical awakening in rehabilitation, tries to get her life back together.

After learning on TV about the deportation woes of a Mexican-born mother, Amy (Laura Dern) tries to motivate her co-workers to join her at a lunchtime rally for the family.  Later, with the support of Tyler (Mike White), she decides to organize a women’s group at Abaddonn, and looks to enlist Judy (Amy Hill), head of human resources, by taking her out to dinner.  She also targets Krista’s (Sarah Burns) baby shower as a place to recruit members, but learns her cause and passion aren’t shared by the suburban domestic set.

Amy is thrilled when Sandy (Robin Wright), whom she’d met in Hawaii during group therapy, comes to visit for a couple of days.  Their kindred relationship starts to erode when Helen (Diane Ladd) refuses to put up Sandy for another night, forcing Amy to drop her friend off with Levi (Luke Wilson).  When Sandy fails to show up to teach a lunch-time yoga session at Abaddonn, Amy’s baser instincts get the better of her.

A disturbing dream leads Amy to confront the emptiness in her life – and her lingering feelings for Levi.  At work, after Dougie (Timm Sharp) gets a promotion, she looks to get into his good graces by setting him up with Harper (Riki Lindhome), a pretty co-worker of Krista’s who had attended the yoga session.  The incident brings her closer to Tyler, who has his own issues with loneliness.

Friction increases between Amy, Dougie and the staff when she finds herself reported to HR for job deficiencies.  Desperate to move out of the department, Amy tries to get Krista to get her a meeting with Damon (Charles Esten), with predictable results.