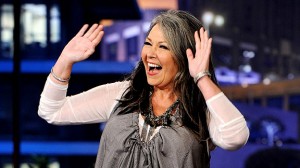 That’s right.  Roseanne Barr is back and on NBC with her new series ‘Downwardly Mobile’.  The series is about a family and friends living in a mobile home community.  This bears resemblance from Barr’s hit comedy show years ago ‘Roseanne’ which was about a low income family living in a post Reagan era.  Now with the financial situation of the country where it is, the timing was perfect to get this show greenlit.

The network bought the multi-camera comedy with a script commitment plus penalty. Co-created by Barr, her boyfriend John Argent and former Roseanne executive producer Eric Gilliland will serve as showrunner.  I’m not sure if this will be a hit like here previous series was, but I am greatly intrigued.  Barr has been making the talk show rounds recently and has been in the headline with some remakrs she has made.  Some of them being that she is running for president for the green-tea party as well as running for prime minister of Israel.  Also she said if the wall street executives and bankers don’t give up some of the wealth they have stolen from the “people” they should be beheaded.  I’ll say this…she knows how to get publicity.