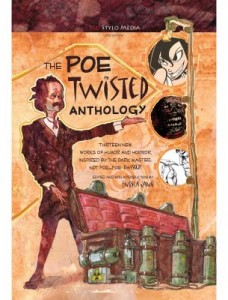 I only have one complaint about The Poe Twisted Anthology. It was a great read, done by groups of terrific artists and writers who really had a handle on the works of Edgar Allen Poe. But (possibly because they have such a good handle) it is not much more twisted than Poe himself, who wrote such macabre works as The Black Cat and The Pit and the Pendulum (which I was surprised to find was not in the anthology.) I think I was sort of expecting to find stories beyond Mr. Poe, and simply found some that were at his level. Not that he didn’t set the bar pretty dratted high.

But there is only one complaint, because the rest of it is pretty amazing.

The anthology is made up of fifteen graphic works: some comics, some imitation grindhouse posters. It’s set up in a good order, starting every story with a quote from the tale or poem it’s based on. This is a good way for the reader to keep up with what would otherwise be a bit of a mish-mash.

The best story is a mixture of The Black Cat and The Tell-Tale Heart, two of Poe’s creepier tales. There’s even a little bit of Masque of the Red Death thrown in for giggles. It’s called The Tell-Tale Cat, and it features a pair of policemen who solve the case in the original Black Cat case and are forced to keep the title character. It’s a splendid fusion of humor, macabre, and noir that genuinely makes you wonder…what they’re going to name the kitty. And for some strange reason, that’s all you feel like you need to wonder.

I enjoyed all of the stories, though I thought it was interesting to see that several of the tales involved zombies. I am of the opinion that zombie comics are drawn solely for the “ick” factor, and these are no exception. However, one in particular (El Dorado, based on the poem of the same name) manages to get past the “ick” and genuinely sadden what was before a gleeful romp through Poe’s works. The reader is promptly taken on to stories less serious, but there is a light feeling of haunt. Frankly, this is good, as Poe was not renowned so much for his humor as the blood and shadows lacing it.

If you are a fan of the King of Macabre, I highly recommend a read-through of The Poe Twisted Anthology.