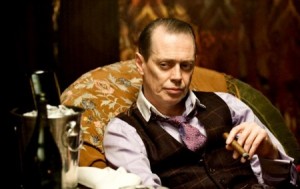 With the first few episodes of ‘Boardwalk Empire’ doing very well in the ratings, HBO has given the go ahead to make a third season for the gangster series.  This is much deserved.  ‘Boardwalk Empire’ is a magnificent achievement in television and is far better than ‘Sopranos’ ever was.

Following resounding critical approval for the series’ second-season debut on Sept. 25, HBO has renewed BOARDWALK EMPIRE for a third season, it was announced today by Michael Lombardo, president, HBO Programming.

“Following a triumphant first season, I was eager to see what Terry Winter, Martin Scorsese and the rest of their stellar team had in store, and they continue to surpass our highest expectations,” said Lombardo.  “The response from the media and our viewers has been extremely gratifying.”

From Terence Winter, Emmy® Award-winning writer of “The Sopranos” and Academy Award®-winning director Martin Scorsese, BOARDWALK EMPIRE is set in the 1920s in the early days of Prohibition, and chronicles the life and times of Enoch “Nucky” Thompson, the undisputed leader of Atlantic City, who was equal parts politician and gangster.

The renewal of BOARDWALK EMPIRE is the latest in a number of recent drama series pickups, following “True Blood,” “Game of Thrones” and “Treme,” as well as commitments to the new series “Luck,” “Veep,” “Girls,” “Life’s Too Short” and Aaron Sorkin’s as-yet untitled project.

Among the early critical raves for the new season of BOARDWALK EMPIRE, New York’s Daily News called the show “delicious entertainment” and “one of the best shows on television,” while Daily Variety termed it “consistently bold and lusty,” as well as “good to the last illicit, intoxicating drop.”  The Boston Globe hailed BOARDWALK EMPIRE as “a must-see show” and “remarkable,” and Entertainment Weekly noted that “drama this good should be illegal.”

BOARDWALK EMPIRE ranks among HBO’s most popular series with an average gross audience of 10.7 million viewers.

At the recent Primetime Emmy® Awards, BOARDWALK EMPIRE led all programming with eight awards, including Outstanding Directing for a Drama Series (Martin Scorsese).