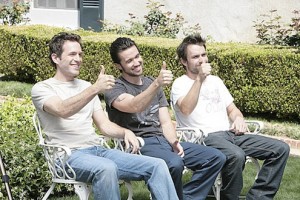 FX has just made a deal with ‘It’s Always Sunny in Philadelphia’ production company and creators/actors; Rob McElhenney, Charlie Day and Glenn Howerton for a new animated comedy series temporarily called ‘Unsupervised’.  FX is greatly behind this team that they already gave this new series a 13 episode first season order and will be paired with the return of ‘Archer’.  ‘Walking Dead’ didn’t even get a 13 episode first season order.

‘Unsupervised’, created and executive produced by Sunny‘s Rob Rosell, Scott Marder and David Hornsby, is a comedy about optimistic best friends Gary and Joel navigating the harsh landscape of teenage life and trying to do what’s right without any parental guidance whatsoever. Its voice cast includes Justin Long, Kristen Bell, Romany Malco, Fred Armisen, Kaitlin Olson and Alexa Vega, along with Rosell and Hornsby.  That’s one hell of a voice cast.  The show will be animated by the same animators as ‘Archer’.

This is great news.  Looking forward to seeing this show.  Your thoughts?