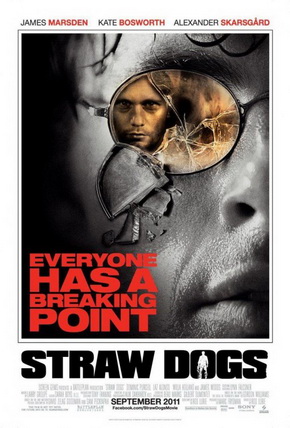 Once I heard of the news that Sam Peckinpah’s 1971 film ‘Straw Dogs’ was getting remade, I was completely skeptical.  It was going to take one hell of a cast a crew to fill Peckinpah’s and Dustin Hoffman’s shoes.  I honestly didn’t think it could be done, but alas I think Peckinpah would be proud of this modern day re-telling of his work from Gordon Williams’ novel, ‘The Siege of Trencher’s Farm’.  Now the remake has its flaws, but everything from the original is mostly seen in this remake.  For fans of the original or for people new to the story, I definitely think you will enjoy all the brutal and barbaric images portrayed in this remake of ‘Straw Dogs’.

So the story is simple enough.  We follow David Sumner who is a film writer who is working on a war film and his beautiful wife Amy Sumner who is a small time actress that travel back to her home town in to the deep south while David writes and finishes his script.  David is a refined gentleman of small stature and doesn’t really exude the most manly of qualities.  The locals see David as a guy they can push around and get closer to Amy.  The locals push and prod at David too much as well as do some absolutely deplorable and unforgivable acts to the point where David snaps and exacts his revenge.  I don’t want to give too much away, but the local southern men are some mean motor scooters.  The most evil of men.  They get everything they deserve.

The cast Rod Lurie conjured up for this film is phenomenal.  Rod Lurie directed this remake and he hasn’t done a whole lot that people would recognize besides ‘The Last Castle’.  James Marsden and Kate Bosworth play the Sumners and they do an excellent job at their roles.  This might be the best role I have ever seen Kate Bosworth in.  She is dynamite in this movie.  Marsden wouldn’t have been my first personal choice for this role, but man, did he win me over.  His sincerity, cowardness and ultimately his ferocious transformation into a killing machine is played to a tee.  Alexander Skarsgard or otherwise known as Eric the Vampire from ‘True Blood’ plays local southern boy, Charlie Venner who is the mastermind and leader of his moronic group of losers.  Skarsgard is perfect at playing creepy, smarmy, and unlikable.  He is perfect for this role.  He is very threatening.  Also, James Woods plays Tom Heddon, the town drunk and former football coach who has a short and bloodthirsty anger for anyone who gets in his way.  Woods is always a gem to see on screen, and here is no different.  He plays a dirt ball perfectly.  You might also recognize Walton Goggins, Dominic Purcell, and Rhys Coiro throughout the film.  All do a great job.

Now I must warn you, there is a pretty brutal rape scene ‘Straw Dogs’.  Yes it was in the original film too.  It was a little different in the original though.  One of the most controversial things of the original film was the rape scene.  Not for the rape itself, but rather that Amy Sumner first  resisted her attackers, but then she became almost agreeable and enjoying the act.  This is non-existent in the remake.  It is straight on brutal and one sided completely.  Other than this difference and the fact that it takes place in the South rather than England, the remake is pretty spot on from the original.  It has everything else, from the cat to the bear trap.

The relationship between the Sumners  is somewhat good at first, but as the locals start messing with them, it slowly turns for the worse.  This is perfectly captured on film as we see each spouse completely make asses of themselves in order to piss the other one off.  It is awkward and real.  None of it works in their favor.  But, it is truly great to see.  Marsden and Bosworth had tons of chemistry on screen.  You can really tell that from their performances.  At one point, years ago, Marsden was hired to play Reverend Jesse Custer for the comic book adaptation of ‘Preacher’ for HBO.  The Reverend Jesse Custer in the book had a blonde wild as hell girlfriend named Tulip.  After seeing this remake of ‘Straw Dogs’, Bosworth and Marsden are perfect for those roles.  Hire them for the feature films.  Please?

I definitely recommend this film for and of the original and newcomers.  It’s almost impossible to fill Peckinpah’s shoes, but this team of creators did it right.  The sadistic, merciless, and cold-blooded tone of this film will haunt you for a while.  But that’s what it is supposed to do.  It is supposed to see how far you can be pushed until you snap and fight for what you love.  They succeeded with this.  See this film this weekend.  You won’t regret it.