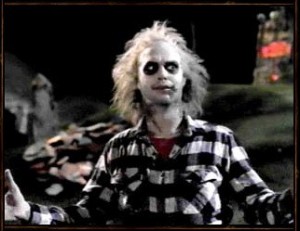 David Katzenberg and Seth Grahame-Smith have just signed a two-year first-look feature producing deal at Warner Bros. with one of the projects being a sequel to the amazing 1980’s film ‘Beetlejuice’.  The film will not be a remake; the intention is to reboot it by advancing the storyline of the original, which was done by The Geffen Company and Warner Bros.

Grahame-Smith will write two scripts as part of the deal, and it’s a distinct possibility that Beetlejuice 2 will be one of them.  I would just love a Beetlejuice sequel.  It will only work if they get back everyone from the original minus the late Glenn Shaddix who played Otho.  I still think Michael Keaton was robbed of an oscar win for his role of Beetlejuice.  And I hope Tim Burton will return to his masterpiece.  Time will tell.