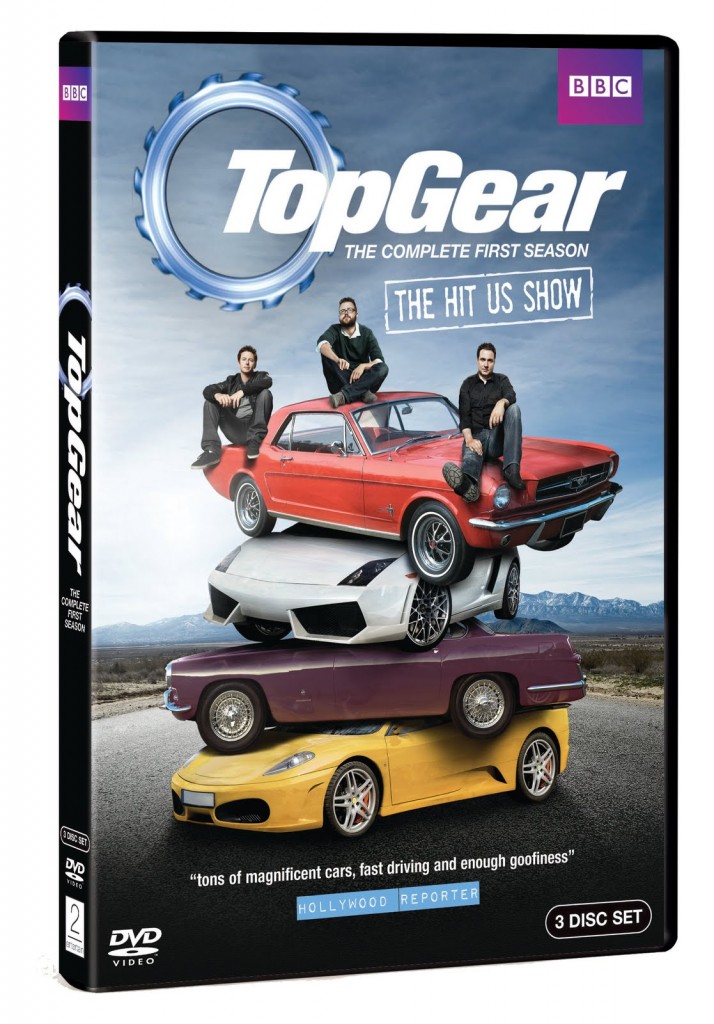 The hit British show ‘Top Gear’ came to American television last year and since then has become a HUGE hit in the states.  And now it has a second season.  I’m not a huge car or vehicle watching fan, but I must say, after watching this DVD, I can’t wait to see the second season.  It has some really cool cars doing some insane experiments and tests with  a few hosts and celebrity guests.  It is a lot of fun to watch and informative.  I learned so much by watching this.  Definitely recommended.

There are ten episodes in total with one of them being a recap episode of the entire season.  Each episode is packed with useful information and some really cool stunts.  Some highlights a personally enjoyed watching were the hosts teach the blind man to drive and drift, purchasing cars for $1000 each and running them on moonshine alcohol, and the episode where the car had to get from point A to point B while evading a cobra helicopter attack.  That was a lot of fun.

The video quality for the DVD is surprisingly really good.  It’s no where near HI-Def quality, but there aren’t any flaws that I was aware of.  The audio is a stereo pro logic 2 track.  The full sound uses all the speakers.  It sounded pretty great.

Commentary Track
Not a terrible commentary track.  You get some useful information and some fun facts about the show.  I must listen to if you are  a fan of the show.

Webisodes(12:50)
There are nine webisodes that are short and sweet.

Top Gear Poolside Chat(30:21)
The hosts talk about the show amongst other things .

Top Gear, races across the pond with the first season of the U.S. version of the world’s most popular car entertainment show. Coming to DVD this July, Top Gear: The Complete First Season, produced by BBC Worldwide Productions, includes all 10 episodes and exclusive DVD extras.  The debut 3-disc DVD set features comedian Adam Ferrara, champion rally car and drift racer Tanner Foust and racing analyst Rutledge Wood.  The intrepid trio packs the first season with super-cars, extreme stunts and challenges, car reviews, celebrity interviews and, of course, the Stig, Top Gear’s silent and mysterious racing driver. The show is chock-full of high-adrenaline action entertainment as it tracks the colorful history of the automobile as well as the eccentric adventures of its hosts with Top Gear’s customary wit and humor.

In this series, Ferrara, Foust and Wood take on extreme challenges including a moonshine run along a Prohibition route in the Deep South, teaching a blind man to drift a Nissan 370Z and racing a HALO jumper in a Hennessey VelociRaptor across the Arizona desert.  The Stig also appears to set definitive “Power Laps” and the team tests some of the world’s fastest cars including a Dodge Viper SRT10 ACR, a Porsche Panamera Turbo, an Aston Martin V12 Vantage and more.

Overall, this revamped series for the USA has a lot going for it and I think it will get more viewers in time.  This is a fun show to watch and I have no doubt you will have fun showing your friends this show and it will definitely spark some conversation on cars in general and what they are capable of.  I definitely recommend this release.