The ‘Detective Dee’ Trailer is Upon Us!!! 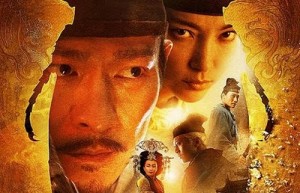 A period epic from genre master Tsui Hark, Detective Dee is an action-packed, visually breathtaking Sherlock Holmes-style mystery starring some of China’s top acting talent. Stunningly choreographed by master Sammo Hung, this intricately plotted whodunit is set in an exquisitely realized steampunk version of ancient China. On the eve of her coronation as Empress (Carina Lau, 2046), China’s most powerful woman is haunted by a chilling murder mystery: seven men under her command have burst into flames, leaving behind only black ash and skeletal bones. Recognizing this threat to her power, she turns to the infamous Dee Renjie (Andy Lau): a man whose unparalleled wisdom is matched only by his martial arts skills. As he battles a series of bizarre dangers, he unveils a chilling truth that places his life, and the future of an entire dynasty, in peril. — (C) Indomina

Rainy night – check. Asian women – check. Falling cherry blossoms – check. Mysterious smoking man – check. Lots of over-stimulating effects and stunts – check. Perfect. Should do well in the “I am Ninja” demographic. If it were possible to feed a movie a Xanax, I would be all up in that shit.

PS – am I crazy or was there a flying ninja kicking deer in there?