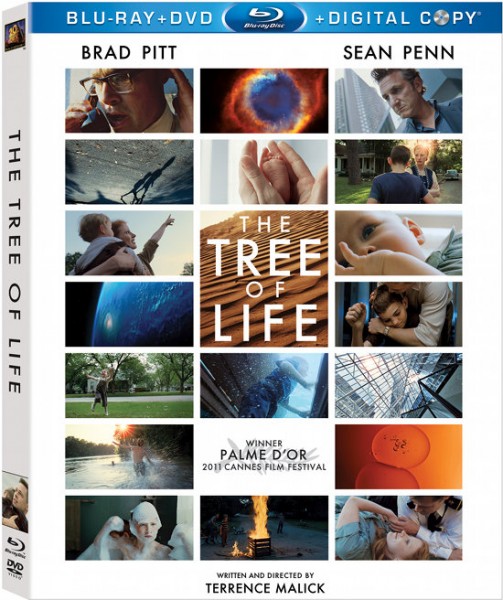 One of my favorite films of the year has just been announced for a blu-ray combo release.  On October 11, 2011, ‘Tree of Life’ will be released on a Blu-Ray+DVD+Digital Copy combo pack.  Read my review of the film HERE.  I just loved everything about this film.  I bet that at some point after the first of the year, Criterion will snatch up the rights to ‘Tree of Life’ and release it in the ultimate edition.  At least that’s what I am hoping for.  Press release below.  Also you can pre-order the film below.

Through stunning cinematography and raw emotional power Malick’s hymn to life excavates answers to the most haunting and personal human questions through a kaleidoscope of the intimate and the cosmic, from the raw emotions of a family in a small Texas town to the wildest, infinite edges of space and time, from a boy’s loss of innocence to a man’s transforming encounters with awe, wonder and transcendence.

The Blu-ray Disc presentation utilizes maximum bit rate encoding and 7.1 audio and a 2.0 stereo mix to bring Malick’s visually stunning masterpiece to life providing consumers with a premium cinematic viewing experience for the home. An exclusive 30-minute documentary on the making of the film, Exploring The Tree of Life, allows fans to dig even deeper into Malick’s visionary work and his cinematic legacy through interviews with his collaborators and cast members as well as with directors Christopher Nolan and David Fincher who share an appreciation for his work.

An impressionistic story of a Midwestern family in the 1950′s, the film follows the life journey of the eldest son, Jack (played as an adult by Sean Penn), through the innocence of childhood to his disillusioned adult years as he tries to reconcile a complicated relationship with his father (Brad Pitt).

THE TREE OF LIFE Blu-ray Combo Pack includes a bonus DVD and Digital Copy version of the film. Pre-book date is September 14.