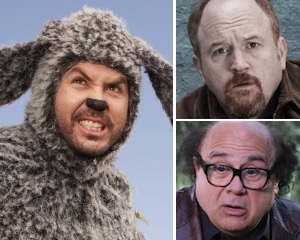 FX has chosen to renew its amazing comedy lineup for more seasons.  ‘Louie’ starring the hilarious Louis C.K. will get a third season.  The second season is currently airing on FX right now.  The new show ‘Wilfred’ based on the Australian version has already received a second season order.  The first season starring Elijah Wood (Frodo) is currently airing on FX and is amazing.  And the popular ‘It’s Always Sunny in Philadelphia’ has been renewed for two more seasons bringing it to nine seasons.  The seventh season will start in September on FX.

This news of ‘Sunny’ makes this series the longest running comedy on basic cable ever.  “They literally had no experience writing, no experience directing,” says Landgraf of the Sunny team. “They literally made a pilot for $200 they shot in their back yard. They were so young and so willing to learn and we didn’t bring in showrunners over them. It was a good partnership. It started out so bare bones — [creator-actor] Rob McElhenney was a waiter and didn’t quit his job until season two.”

This is all good news.  These three shows have so much comic gold in them, that I have no doubt they will last another five years or longer.  Much congratulations to these three shows.

One thought on “FX Renews ‘Louie’, ‘Wilfred’, and ‘It’s Always Sunny in Philadelphia’!!!”