Disney and Ben Stiller’s Production Company ‘Red Hour’ Will Make ‘Quantum Hoops’ Based on The 2007 Documentary!!! 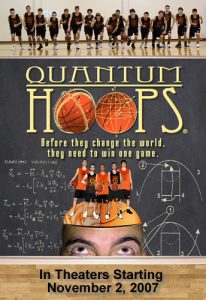 Disney has just purchased the rights to remake ‘Quantum Hoops’ which is a 2007 documentary that followed the 2006 Caltech basketball team that had 21 seasons and 245 conference games without a single win.  This team lost each game regularly with a sixty point deficit.  Ben Stiller’s ‘Red Hour’ production company will produce the film which will be a comedy based on the documentary.  It will be based on the “story of a group of brainiacs and future world political and industrial titans who tried to overcome a lack of athletic skills by getting an exiled NCAA coach to lead their team to what seemed for two decades an impossible dream: one in the ‘win’ column.”

The script will be written by Stan Chervin who adapted the book ‘Moneyball’ in to a film with Brad Pitt and Jonah Hill which will be coming out soon.  The trailer below to the 2007 documentary looks amazing.  I have not seen this yet, but I will not.  I hope it doesn’t turn out to be ‘Dodgeball’ in any way shape or form.  This story is much more than that.