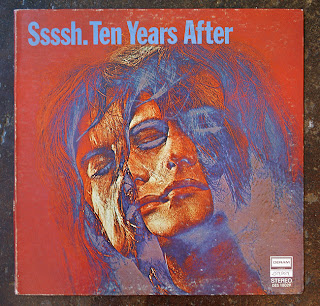 When one starts talking about the British Invasion, one of two things come to mind: 1) The American Revolution and 2) The Beatles, The Rolling Stones, The Kinks, The Who and every other hit rock n’ roll band that came to America from the ‘other side of the pond’ in the 1960s. However, little do people realize that Alvin Lee and his band Ten Years After also hails as part of the musical British Invasion.

Now, I will admit that my knowledge of Ten Years After was quite limited, mostly limited to their one live performance of “I’m Going Home” from the “Woodstock” documentary in 1970, a performance I liked initially, but became bored with after subsequent viewings. But, suffice to say I’m happy to have acquainted myself with more of their catalog over the last couple of years, and my opinion has drastically changed for the better.

“Ssssh”, the third studio album (forth album over all) from Ten Years After, is two full-length sides of essential rock from one of Britain’s most semi-obscure bands, much in the sound vein of The Small Faces, Johhny Winter and Joe Cocker’s ‘Grease Band’ thrown in for good measure. “Ssssh” grabs your attention from the start, not with any kind of blues guitar hook or three-chord riff, but with the sounds of a milk-starved kitten (produced by Lee on guitar) which always seems to trip my own cats out when playing on the stereo. Immediately, within a split second the album’s opening track “Bad Scene” kicks open your door like a frantic mailman, just wanting to get out of the cold and deliver your package. “Two Time Mama” relaxes things just a bit with some interesting blues slide work on what sounds like an electrified National steel body guitar, warning ‘don’t you two time me.’ 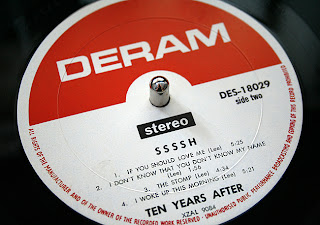 Side One wraps up a nice little blues homage package with “Stoned Woman” and a rocking Sonny Boy Williamson cover of “Good Morning Little School Girl”, a song that still makes me feel a little dirty after hearing it, with visions of Little Red Riding Hood and the Big Bad Wolf over and over again.

Side Two of “Ssssh” mixes things up just a tad with “If You Should Love Me”, a song that sounds like a total precursor to the 1970s arena rock ballads we’ve come to know and love/loath, but really makes for a nice, lovely and warm AM Radio hit. Or, at least could have made the cut for the “Dazed And Confused” movie soundtrack. Pianist Chick Churchill breaks out into his inner ‘Steve Winwood’ on “I Don’t Know That You Don’t Know My Name”, making the strange lyrical ballad (all 1:56 minutes of it) another worthwhile hit from the record. The blues kicks back into overdrive on the follow-up track “The Stomp”, which sounds like a mash up of Booker T. & The MGs and the Jon Spencer Blues Explosion, with driving funk organs, which could make for the start of a killer album all on its own. 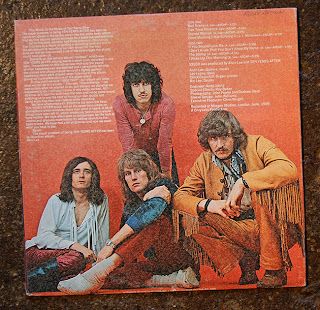 “I Woke Up This Morning” rounds out side two of the record, bringing the album back to the blues where it started, chock full of Leslie West (of the band ‘Mountain’) guitar riffs and Peter Green (of the original ‘Fleetwood Mac’…when they were a bad ass blues band) vocal styling, making Ten Years After quite the original and chameleon-like band they’ve been known to be. Bassist Leo Lyons and drummer Ric Lee hold down a steady groove, while Alvin Lee tears up on the guitar solos.

It really is a shame that the footage released from the “Woodstock” documentary doesn’t feature more of Ten Years After’s live chops, as it is evident from this album alone they could hammer out the blues as well as the rest of them. Though subsequent live material has surfaced of the band on CD, nothing really holds a candle to what was pressed in wax in their hey day of the British Invasion.