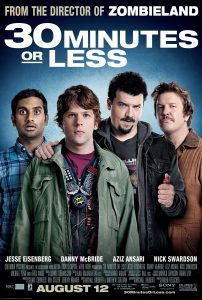 ’30 Minutes or Less’ is one of those movies you will laugh so hard that your entire body will hurt after watching the film.  Ruben Fleischer directed ’30 Minutes or Less’.  His previous film was the horror comedy hit ‘Zombieland’ with Jesse Eisneberg.  After ‘Zombieland’ made tons and tons of money, Fleischer was pretty much offered every mega budget film in Hollywood.  He turned them all down to direct this very small comedy.  Not sure why he chose to do this, but it is indeed hysterical.  This movie does not succeed in its story plot, but rather its knee slapping comedic dialogue between the actors.  This is one of those films you will be quoting for days and remember at inappropriate moments and just burst out laughing from a piece of the dialogue.  Great little film ’30 Minutes or Less’ is.  Definitely recommend seeing it.

One thing I noticed about ’30 Minutes or Less’ was the visual style of the film was far different and dare I say much inferior to ‘Zombieland’.  All the fun camera shots, the slow-mo, and pans that were in ‘Zombieland’ were non existent in ’30 Minutes or Less’.  Like I said before, this is a very small film with big stars and giant laughs.  The film only runs a little over 80 minutes.  It goes by very quick.  It seems like the film was loosely based on the real life story of Brian Douglas Wells which is a very serious matter, but it is clear from the very start that this film is a complete comedy and should not be taken seriously.

So we meet Dwayne (Danny McBride) who is a 30 something loser who lives with his dad , ‘The Major’ (Fred Ward) who won the lottery a few years ago.  Dwayne and his best friend Travis (Nick Swardson) are waiting for ‘The Major’ to die off so they can inherit his lottery winnings.  Dwayne and Travis are mostly idiotic, but they have dreams and aspirations to do something with their lives when the get this money.  They want to open a tanning salon that moonlights as a brothel.  They have even gone so far as making a menu for all the different type of sexual acts you can order at the tanning salon.  Early in the film you will figure out that Dwayne is the alpha of the relationship.  When both Travis and Dwayne realize that ‘The Major’ has no intention of “checking out early” or for that matter in the next twenty years, the two decide that they need to hire a hitman to kill Dwayne’s dad.  But, they have no money to pay for a hitman which leads them to their back-up plan.  Kidnap a poor sap and rig him with  a bomb to rob a bank for them so they can pay the hitman.  From here we meet Nick (Jesse Eisenberg) who is a pizza delivery boy who is completely content and happy with not doing anything with his life other than watching movies and delivering pizza.  His best friend Chet (Aziz Ansari) was at one point just like his friend Nick, but has taken a job as a full time substitute teacher and is getting his life on the roll.  This gives tension between the two.  Well, Nick is given a pizza deliver order and it turns out it is to Dwayne and Travis who to much to Nick’s dismay, they don’t want pizza.  The two wire Nick with  a giant bomb and tell him he has ten hours to rob a bank or the bomb will explode.  From here on, it is a non-stop action comedy.

The conflict and dialogue between Eisenberg and Ansari is brilliant.  It’s probably the best part of the film.  Ansari and Swardson are at the top of their game right now and it definitely shows here in ’30 Minutes or Less’.  There is a great Facebook jab at Eisenberg early on in the film that was classic.  Another standout feature of ’30 Minutes or Less’ is actor Michael Pena who plays the hitman, Chango.  Pena plays him perfectly.  Kind of scary and completely hilarious.  But the two never seem to overlap in a negative way.  It is played flawlessly.  Of course Swardson and McBride play very well off each other.  They are great comedic actors and it just flows excellently.  McBride’s character is almost like a much more insane and menacing Kenny Powers.  Eisenberg’s and Ansari’s chemistry is more awkward than anything, but it seems real and it just comes across as comedic gold.

This film has tons of great and priceless dialogue.  That’s what keeps this film going.  It’s not the story, but just the interactions.  I’d imagine if it weren’t for the huge star cast and the hilarious dialogue, that this movie would be forgotten the moment after you watch it, but because there is so much uproarious  and witty banter, you will find yourself laughing so hard you will hurt. People will no doubt talk about ‘Zombieland’ when and after watching ’30 Minutes or Less’.  It seems that Ruben Fleischer didn’t further his directing talent with ’30 Minutes or Less’, but more just made a film with funny dialogue with friends.  The result is a brainless story with top comedic dialogue with great actors.  Definitely worth seeing if you want to laugh your ass off.